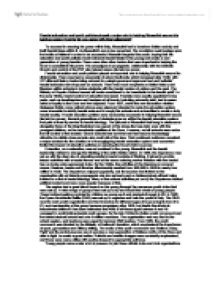 Fascist education and youth policies played a major role in helping Mussolini secure his hold on power. How far do you agree with this judgement?

Fascist education and youth policies played a major role in helping Mussolini secure his hold on power. How far do you agree with this judgement? To succeed in securing his power within Italy, Mussolini had to transform Italian society and instil fascist ideas within it. As Mussolini's son-in-law remarked, 'the revolution must impinge upon the habits of Italians' in order to be successful. Mussolini targeted the youth, hoping that his education and youth policies would entrench fascist ideals in the young and create a new generation of young fascists. There were other other factors that were important in helping the Duce to consolidate his power. His campaigns of propaganda, relationship with the Catholic Church and control of the PNF also helped secure his hold on power. Fascist education and youth policies played an important role in helping Mussolini secure his dictatorship. There was heavy censorship of school textbooks which increased after 1936, with 317 different history books being reduced to a single governent approved text and 'suitable' fascist textbooks were imposed on schools. There was much emphasis on Italian history and literature within schools to imbue students with the fascist version of culture and the past. The Ministry of Popular Culture banned all books considered to be 'unsuitable to the fascist spirit'. In the early 1930s, fascist control of education increased. Fascists were usually appointed to key posts, such as headteachers and teachers at all levels, including university staff, had to swear oaths of loyalty to the Duce and few objected. ...read more.

Patriotic and warlike images were constantly emphasised, and there were many rallies with youths dressed in appropriate uniforms. Young people came under a lot of pressure to join these official clubs and rival organisations had many obstacles put in their way, for instance, after 1931 Church clubs were not permitted to organise sporting activities. Although Catholic youth clubs such as Catholic Action continued to exist, the fascist youth movement was perhaps the regime's most successful propaganda agent. In 1937, the ONB merged with the Young Fascists to form a unified party youth organisation, the Gioventin Italiana del Littore (GIL). From 1938 the GIL provided pre-military training as well as proaganda. By 1939, it had done much to persuade a generation of young people that fascism was a normal and natural part of the Italian way of life. The youth clubs proved most popular and successful for school children, and, curiously, the regime's approach to the youth showed a relaxed attitude to university students criticism of the regime. This emphasises that it was more crucial for Mussolini to target the youngest Italians, still in their formative period, and create a new generation of fascists within Italian society who would support and champion their Duce. This certainly served to strengthen the regime, if not necessarily convert millions to fascism. It was harder for the youth and education policies to be so successful with older students, who had more freedom for dissent. ...read more.

The repression and control of Italians also helped to secure Mussolini's hold on power. Repression was an essential part of Mussolini's dictatorship, though it never assumed the character that it did in Nazi Germany. There was a fear of terror within Italian society which led to people toeing the line and so as not to suffer the consequences of opposing Mussolini's regime. People did not challenge the government, as for many people keeping quiet meant safety . Mussolini set up a secret police, the OVRA, which harried opposition. The lack of opposition to the fascists meant that the Italians had no alternatives to Mussolini and PNF and could not unite against him, which put Mussolini in a secure position. This strengthened his role as leader, his control of society meant that it was beneficial for people to be compliant and ensured that he was dominant in Italy. Fascist education and youth policies played a significant role in helping to secure Mussolini's hold on power, but these policies were not the only factors that allowed the Duce to consolidate his leadership. Education and youth policies had quite a large impact on the younger generations of Italians, but it was limited and did not secure the support of all Italians for Mussolini. Mussolini's intense propaganda campaigns contributed to securing his hold on power, as did the improved relations between the Church and state. Mussolini's dominant role within the PNF also contributed to this, his control of the fascist party ensured that he had no opponents and the party became more obedient and subservient. ...read more.