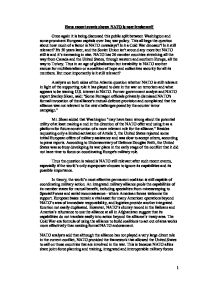 Have recent events shown NATO is now irrelevant? Once again it is being discussed this public split between Washington and some prominent European capitals over Iraq war policy. This all begs the question about how much of a factor is NATO nowadays? Is it a Cold War dinosaur? Is it still relevant? It's 50 years later, and the Soviet Union isn't around any more but NATO still is and it's increasing in size. NATO has 26 member countries stretching all the way from Canada and the United States, through western and southern Europe, all the way to Turkey. Thus in an age of globalisation but instability is NATO another excuse for multilateralism or a coalition of hope and collectives security for all its members. But most importantly is it still relevant? Analysts on both sides of the Atlantic question whether NATO is still relevant in light of the supporting role it has played to date in the war on terrorism and what appears to be waning U.S. ...read more.

An integrated military alliance pools the capabilities of its member states for mutual benefit, including specialties from minesweeping to Special Forces and aerial reconnaissance - where American forces welcome the support. European bases remain a vital asset for many American operations beyond NATO's area of immediate responsibility, and logistics provide another integrated function not easily duplicated. However, NATO's clumsy record in the Balkans and America's reluctance to use the alliance at all in Afghanistan suggest that its capabilities do not translate easily into action beyond the alliance's treaty area. The Cold War-era formula of using the alliance to build coalitions to act out of area works more effectively than seeking formal NATO endorsement. NATO analysts add that although the alliance has not played a very large direct role in the current conflict, NATO provided the framework that allowed the United States to call on those countries that are involved in the war. This is because NATO allies share joint-force planning and training, integrated and interoperable military forces and habits of cooperation that have been developed through decades of working together. ...read more.

But one could argue that surely with the end of the Cold War NATO has understood it must change and has done so. The secretary-general says eventually we think it's going to be ironed out because that's the way the alliance works, he says -- or that's the way it's supposed to work. Some of those old European countries have discovered a new purpose to NATO though, not to resist Soviet aggression, but now to resist what they regard as American aggression. It must also be noted that NATO is determined to fight back though and as a growing organisation with a lot of countries in Europe that see it as a bridge between them and the United States it can be argued it is still very relevant. NATO itself knows it must re- organise itself to gain importance thus because relatively little progress has been made to date in achieving the goals of the 1999 capabilities initiative, NATO officials recently launched a new, more-focused plan. It is designed to enable the alliance to play a greater role in combating terrorism - both directly if necessary and more likely indirectly by supporting non-NATO operations. ?? ?? ?? ?? 1 ...read more.