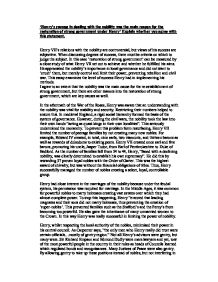 'Henry's success in dealing with the nobility was the main reason for the restoration of strong government under Henry' Explain whether you agree with this statement.

'Henry's success in dealing with the nobility was the main reason for the restoration of strong government under Henry' Explain whether you agree with this statement. Henry VII's relations with the nobility are controversial, but views of his success are subjective. When discussing degrees of success, there must be criteria on which to judge the subject. In this case 'restoration of strong government' can be measured by a close study of what Henry VII set out to achieve and whether he fulfilled his aims. He appreciated the nobility's importance in local governance and did not want to 'crush' them, but merely control and limit their power, preventing rebellion and civil war. This essay examines the level of success Henry had in implementing his methods. ...read more.

Henry VII created once earl and five barons, promoting his uncle, Jasper Tudor, from Earl of Pembrokeshire to Duke of Bedford. As the number of families fell from 54 to 44, Henry, "faced with a declining nobility, was clearly determined to establish his own supremacy". He did this by rewarding 37 proven loyal nobles with the Order of Garter. This was the highest award of chivalry, but was without the financial obligations of titles. Thus, Henry successfully managed the number of nobles creating a select, loyal, controllable group. Henry had close interest in the marriages of the nobility because under the feudal system, his permission was required for marriage. In the Middle Ages, it was common for powerful nobles to marry heiresses creating vast estates over which they had almost complete power. ...read more.

By allowing gentry to take up these positions instead of nobles, but not interfering in the regional noble authority, Henry successfully managed to control the influence of the nobility without causing resentment. Henry succeeded in controlling the nobility by creating few new peerages, thereby limiting their numbers. He also enforced laws against livery and maintenance firmly without fear or favour. In the last few years of his reign, when due to Arthur's death he felt insecure; Henry began to use the system of bonds and recognisance's harshly. This resulted in a backlash from the nobility after his death. In spite of his harshness, Henry still made good use of the nobility to help him rule both local and national level and they were an important presence in the Royal Council too. Early Tudor England was a society that believed in good rule from above and in providing this for his subjects Henry's nobility played a key role. ...read more.