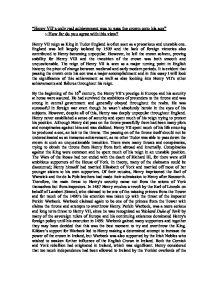 &quot;Henry VII's only real achievement was to pass the crown onto his son&quot; ~ How far do you agree with this view?

"Henry VII's only real achievement was to pass the crown onto his son" ~ How far do you agree with this view? Henry VII reign as King in Tudor England is often seen as a precarious and unstable one. England was left largely isolated by 1509 and the lack of foreign victories also contributed to Henry becoming unpopular. However, he left the crown solvent, proving stability for Henry VIII and the transition of the crown was both smooth and unquestionable. The reign of Henry VII is seen as a major turning point in English history; the pivot of change between medieval and early modern periods. It is evident that passing the crown onto his son was a major accomplishment and in this essay I will look the significance of this achievement as well as also looking into Henry VII's other achievements and failures throughout his reign. By the beginning of the 16th century, the Henry VII's prestige in Europe and his security at home were assured. He had survived the ambitions of pretenders to the throne and was strong in central government and generally obeyed throughout the realm. He was successful in foreign war even though he wasn't absolutely heroic in the eyes of his subjects. ...read more.

. Maximilian, annoyed by the Kings treachery in making the Treaty of Etaples without his agreement, also joined Warbeck in his conspiracies against the King to get his own back, but lacked the money to fit out a proper invasion force for Warbeck. Warbeck also gained support from Scotland (James IV). The age-old traditional warfare between neighboring kingdoms was a threat the Tudor monarch could not be ignored. Peasants from the south-west who had been disturbed by the Cornish rebellion in 1497 also supported Warbeck. In 1497 Warbeck was captured, but his influence was immensely strong and reached into the Royal Court. He might have been awarded the same mercy as Simnel (who now worked in the royal kitchens) had he not tried to escape from prison in the Tower. Henry could not afford now to let him live, and he was executed in 1499. As well as the conspiracies made against him, Henry also fought in the Battle of Stoke (1487) to secure the throne. It is the strengths in all these achievements that made it possible for Henry to pass on the throne Passing on the throne was an immense achievement, but Henry VII did also accomplish other achievements of value. ...read more.

The issue of the crown being passed over in such a smooth transition as a huge achievement is also questionable. No other Tudor monarch died without being in debt and yet this had not diminished their reputations. Perhaps Henry was lucky to die when he did. By the end of his reign he was deeply unpopular and the severity of the rebellion was mearly a matter of time. Henry VII was again fortunate that his son was old and wise enough to accept and maintain the throne. It could be debated whether or not Henry VII was a great King, but he was clearly a successful King. He had several goals that he had accomplished by the end of his reign. He had established a new dynasty after 30 years of struggle, he had strengthened the judicial system as well as the treasury and had successfully denied all the other claimants to his throne. The monarchy that he left to his son was a fairly secure one and most definitely a wealthy one. It is clear that Henry VII had to work harder to keep the throne and pass it over than other Kings, and his loyalty and thoroughness were perhaps his personal qualities which allowed him to keep the crown in the Lancastrian dynasty. Francesca Baggs October 2003 ...read more.