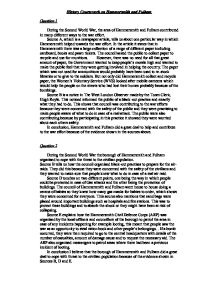 History Coursework on Hammersmith and Fulham

History Coursework on Hammersmith and Fulham Question 1 During the Second World War, the area of Hammersmith and Fulham contributed in many different ways to the war effort. Source A, which is a newspaper article, tells us about one particular way in which Hammersmith helped towards the war effort. In the article it states that in Hammersmith there was a large collection of a range of different paper including cardboard, books and pawn tickets. The council asked the public to collect paper to recycle and use for munitions. However, there was no need for all that great amount of paper, the Government wanted to keep people's morale high and wanted to make the public feel that they were getting involved in helping the country. The paper which was not used for ammunitions would probably have been used to re-stock libraries or to give to the soldiers. But not only did Hammersmith collect and recycle paper, the Women's Voluntary Service (WVS) looked after mobile canteens which would help the people on the streets who had lost their homes probably because of the bombings. Source B is a notice in The West London Observer made by the Town Clerk, Hugh Royle. This noticed informed the public of a black-out practise and exactly what they had to do. This shows that council was contributing to the war efforts because they were concerned with the safety of the public and they were practising to make people aware of what to do in case of a real attack. The public were also contributing because by participating in this practice it showed they were worried about each others safety. In conclusion, Hammersmith and Fulham did a great deal to help and contribute to the war effort because of the evidence shown in the sources above. Question 2 During the Second World War the borough of Hammersmith and Fulham organised to cope with the threat to the civilian population. ...read more.

Also they don't give us the specific definitions of some of the words they use such as 'serious' casualties and houses demolished and 'beyond repair'. Finally, not all the London boroughs are included so we can not see the full impact of the war throughout the whole of London. Source K is a very personal account of what someone went through written in a letter in 1940 which tells how some people felt during the war and how they reacted. It tells us that some people's morale was not very high. It also tells us specific places of where there were explosions, times and dates in which these bombs took place and what types of victims there were. This letter suggests that people tried to lead a normal life despite what was happening. We can not trust this source fully because it says the letter is edited and it is incomplete. Also because not everyone during the war went through the same experiences and in the letter we can tell that the person wanted to get out of London as soon as possible, which might mean that they might have exaggerated. In conclusion I believe sources H and I to be the most valuable. This is because by looking at the photograph it tells you a lot of information and you can actually see what it was like after a bomb had hit the area and also the provenance does give us some information as well alongside the image. I have taken into account that these sources are not completely trustworthy, however I chose these images based on how valuable they are not on reliability. Question 5 Source M is written by Reginald Nicholson to the editor of the times stating the further problems to be faced as a cause of evacuation. However we need to discuss in further detail whether the concerns raised in his letter were justified. ...read more.

Having studied a few sources from a GCSE paper two from 1994 I have gained extra information to say whether or not I agree with the statement that civilians pulled together like heroes during the Second World War. According to Source J from the GCSE exam paper it states that whenever the sirens went off, people began running around not knowing what to do, showing that they did not take the initiative to remain clam in order to help the situation. However we do not know who wrote this secret report to the government or how they found this information. Source K which is a diary entry of someone who knew several members of the government, wrote that as the King and Queen visited the destroyed areas, they were booed by the civilians. This suggests that people were very bitter and they're morale was not very high. However there are some complications with this source as he states 'it is said that'. This suggests that he does not know for certain that this event took place. Finally, Source L, which is from the book Don't You Know There's A War On states that many men and women continued to turn up for work even though there was widespread fear during the Blitz. This suggests that people were willing to do what it was necessary to help they're country, even if it meant facing danger. However this source is not very reliable as we do not know who collected this information and for what reason they did this. From looking at Sources F, M and E and my own knowledge I can clearly say that there were some people who were extremely helpful during the war and did a great deal for their country. However we can not ignore the fact that there were some who took advantage of the war and others who were very pessimistic about the war and did not do a great deal to help. ...read more.