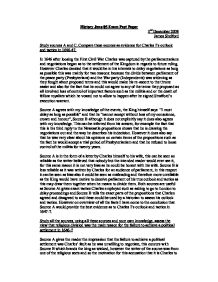 History June 05 Exam Past Paper 3rd December 2008 James Shelford Study sources A and C, Compare these sources as evidence for Charles I's outlook and tactics in 1646-47. In 1646 after loosing the First Civil War Charles was captured by the parliamentarians and negotiations began as to the settlement of the Kingdom in regards to future ruling. However Charles decided that it would be in his interests to delay negotiations as long as possible this was mainly for two reasons: because the divide between parliament of the peace party (Presbyterians) and the War party (Independents) was widening as they fought about proposed terms and this would make his re-ascent to the throne easier and also for the fact that he could not agree to any of the terms they proposed as all involved loss of control of important factors such as the militia and or the death of fellow royalists which he vowed not to allow to happen after he signed Strafford's execution warrant. Source A agrees with my knowledge of the events, the King himself says "I must delay as long as possible" and that he "cannot accept without loss of my conscience, crown and honour", Source B although it does not explicitly say it does also agrees with my knowledge. ...read more.

Source B which brands the king as wicked, however the writer of the source was from one of the religious sects and so the motivation for this accusation that it is Charles to blame could also be seen as religious. Source C however gives a completely different perspective on events; showing the King accepting to all religious demands from parliament. Finally source D blames another factor for the failure; it says that parliament is to blame calling them corrupt and saying it is their duty to remain in arms rather than disband. Charles was a major factor in the failure to achieve a settlement, he did not understand his own situation, which was very precarious, and this had a large impact on the failure to reach a settlement. This can be seen by his intentions not to give up any important or prerogative powers for example in source C he tells how he cannot consent to losing the militia for twenty years. If he had known the full extent of his position and what would happen in the following years he may have been more willing to negotiate on this. He also played for time during negotiations hoping that this would weaken his enemies as they argued amongst themselves, however although this tactic worked at first and achieved more reasonable ...read more.

The levellers were also an important factor, they were the most important political group outside parliament and heavily influenced the army, they demanded amongst other things that no authority was above parliament, this undermined the King and meant cracks began to show between the army and parliament as they disagreed and were driven to holding debates such as those at Putney, this encouraged the King to make the engagement which lead to the start of the second civil war. Examples of leveller views the caused this can be seen in Source B for example "you should transfer the revenues of the crown to the public treasuary". The Scots are also to blame as if they had not interfered Charles would have not been able to start a second Civil War and an agreement may have been reached. Source A which allows the reader to see some of the reasons Charles can be blamed is in the form of a letter by Charles himself to his wife, this can be seen as reliable as the writer believed that nobody but the intended reader would ever see it, for this same reason it is not very bias as he could be honest with his wife. This source is also usefull as it gives his tactics aswell as intentions for example it says how he will ask to go to London to delay. See shepps.... Have I just listed =S ...read more.