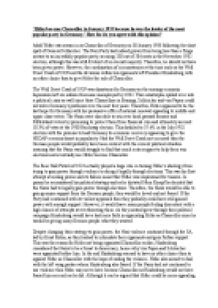 Hitler became Chancellor in January 1933 because he was the leader of the most popular party in Germany. How far do you agree with this opinion?

﻿?Hitler became Chancellor in January 1933 because he was the leader of the most popular party in Germany.? How far do you agree with this opinion? Adolf Hitler was sworn in as Chancellor of Germany on 30 January 1933 following the short spell of General Schleicher. The Nazi Party had indeed grown from being less than a fringe irritant to an incredibly popular party, securing 230 out of 584 seats in the November 1932 election, although this was still 63 short of an overall majority. Therefore, he should not have been given power. However, the combination of circumstances at the time such as the Wall Street Crash of 1929 and the divisions within his opponents left President Hindenburg with no other choice than to give Hitler the role of Chancellor. The Wall Street Crash of 1929 was disastrous for Germany as the ensuing economic depression left six million Germans unemployed by 1932. This catastrophe spilled over into a political crisis as well since three Chancellors in Bruning, Schleicher and von Papen could not solve Germany?s problems over the next few years. ...read more.

In prison he reconsidered his political strategy and as he dictated Mein Kampf he decided that the Nazis had to legally gain power through elections. Therefore, the Nazis would be able to gain genuine support from the German people; they would be loved and not feared. If the Party had continued with its violent approach then they probably could have still gained power with enough support. However, it would leave many people feeling discontent with a high chance of attempts at overthrowing them. As they instead grew through their political campaign Hindenburg would have had more faith in appointing Hitler as Chancellor since he would be giving many German people what they wanted. Despite changing their strategy to gain power, the Nazi violence continued through the SA, led by Ernst Rohm, as they looked to intimidate their opponents and gain further support. This was the reason for Hitler not being appointed Chancellor earlier, Hindenburg considered the Nazis to be a threat to democracy, hence why von Papen and Schleicher were appointed before him. ...read more.

This was not to be and so the NSDAP were able to win the election and show Hindenburg that they were the most favoured political party at the time. In conclusion, I agree that the Nazi Party were the most popular party in Germany when Hitler was appointed as Chancellor. However, this was not the sole reason for his appointment. The fear and threat of violence from the SA meant that Hindenburg was ?bullied? into giving power to Hitler whilst the Great Depression caused by the Wall Street Crash gave the NSDAP the chance to win over more voters with the promise of leading the country to recovery. The division of the left wing between Socialism and Communism also benefited the Nazis slightly as one of the two parties alone could not win enough votes. Overall, it was the violence maintained whilst the party simultaneously tried to take power through legal methods that saw them in the position with the highest popularity, giving Hindenburg no choice but to appoint Hitler as Chancellor of Germany. ...read more.