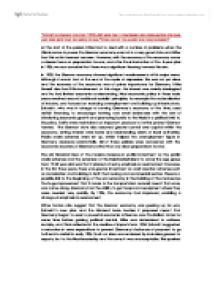 &quot;HITLER'S ECONOMIC POLICIES (1933-45) WERE ONLY CONCERNED WITH PREPARATION FOR WAR, AND THEN SUPPLYING THE NEEDS OF WAR.&quot;HOW FAR DO YOU AGREE WITH THIS STATEMENT?

"HITLER'S ECONOMIC POLICIES (1933-45) WERE ONLY CONCERNED WITH PREPARATION FOR WAR, AND THEN SUPPLYING THE NEEDS OF WAR."HOW FAR DO YOU AGREE WITH THIS STATEMENT? At the start of the period, Hitler had to deal with a number of problems-when the /Nazis came to power the German economy was not in a very good state and Hitler had this as his foremost concern. However, with the recovery of the economy came a clearer focus on preparation for war, and after the introduction of the 4-year plan in 1936, we can consider that there was a significant leaning towards this aim. In 1933, the German economy showed significant weaknesses in all its major areas. Although it was in fact at the end of the cycle of depression this was not yet clear and the recovery of the economy was of prime importance for Germany. Hitler himself also had little involvement at this stage- his interest was mainly ideological and he had limited economic understanding. ...read more.

Schacht's new plan and the bilateral trade treaties it proposed meant that Germany began to exert a powerful economic influence over the Balkan states for some time before gaining political control. Hitler was determined to achieve Autarky, and this is reflected in the decline of imports from 1934. Schacht suggested a reduction in arms expenditure to prevent Germany's balance of payment to go further into deficit in early 1936. Such an idea was endorsed by industries geared to exports, but to the Nazi leadership and the army it was unacceptable. This sparked the Guns or Butter debate as to whether the German economy should place greater emphasis on rearming or producing consumer goods. The four-year plan of October 1936 indicated a turning point in the economy. Its policies were clearly geared towards war; such aims as the prioritisation of strategic imports such as chemicals and metals, increasing production of raw materials and developing substitutes for those that Germany had limited resources of clearly indicated a move towards production for war. ...read more.

Speer implemented further programmes to exploit Germany's resources and labour force more effectively, wholeheartedly trying to supply the needs of war. He encouraged the employment of women in the arms factories and using the concentration camp prisoners as workers to help with this aim, and it showed positive results - production increased substantially. By 1944 production peaked at a level that was three times that of 1942. Overall, Hitler's and Nazi economic policies had a clear focus on preparation for war and then supplying its needs. There were some exceptions to this - the very early period from 1933-6 can be considered to have had a greater focus on economic recovery than providing for war with policies geared at reducing unemployment and stimulating growth. Throughout the war there was production not aimed at war, such as food, but this can also be seen to be part of Hitler's aim for Autarky. However, with the introduction of the 4-year plan and the evidence of the Hossbach memorandum from 1936 we can see that the German economy became decidedly more focused on preparing for war and supplying its needs. ...read more.