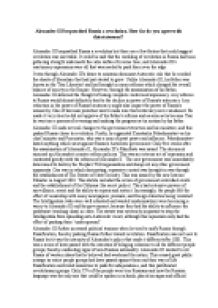 Alexander III bequeathed Russia a revolution. How far do you agree with this statement?

﻿Alexander III bequeathed Russia a revolution. How far do you agree with this statement? Alexander III bequeathed Russia a revolution but there are a few factors that could suggest revolution was inevitable. It could be said that the rumbling of revolution in Russia had been gathering strength underneath the calm surface for some time; and Alexander III's reactionary repressions were all that was needed to push them over the edge. It was through Alexander III's desire to maintain dominant Autocratic rule that he crushed the shoots of liberalism that had just started to grow. Unlike Alexander III, his father was known as the 'Tsar Liberator' and had brought in many reforms which changed the overall balance of society in the Empire. However, through the assassination of his father, Alexander III abhorred the thought of losing complete control and supremacy. Any reforms to Russia would almost definitely lead to the decline in power of Russia's autocracy. Any reduction in the power of Russia's autocracy might also impact the power of Russia's monarchy. One of his main priorities was to make sure that Autocracy never weakened. He made it very clear he did not approve of his father's reforms and as soon as he became Tsar he went on a process of reversing and undoing the progress set in motion by his father. Alexander III made several changes to the government structure and his ministers; and this pushed Russia closer to revolution. ...read more.

This led to the creation of the Marxist party; set up by Trotsky (who was a Jew). This proves that Russification only increased revolutionary feeling in the heart of Russia. It could be said that Alexander III did not think this political policy through because in effect half of the population now had another reason to hate the Tsar. One of the key events in what would turn out to be the start of Russia?s autocratic ruin was: appointing Sergei Witte as financial Minister in 1892. Russia was a vast and underdeveloped country whose economy was mainly based on agriculture. It had not had an industrial revolution whereas many other European powers had. Sergei Witte believed Russia should be more powerful and his views on how to do so were centred around economic development. Witte's reforms, known as 'The Great Spurt', brought in many transformations and gave the peasants a sense of freedom and progress never experienced before. Unfortunately, for all its advantages, industrialisation had some adverse consequences. The working class was: exploited, poorly treated, and clustered together in large numbers and therefore susceptible to revolutionary ideas. Witte's policies included: the emphasis on production of capital goods such as iron, steel coal and machinery; the building of the Trans-Siberian Railway; the creation of a new educational system (to train personnel for industry); and the 'Witte system' for economic development. ...read more.

Also the introduction of a new judicial system meant that there was a trial by jury that ordinary Russians participated in instead of the Tsar's officials. He also introduced the first form of elective government known as the zemstva. These local units were limited but had control over elementary education and road building. Because Russians had started to feel what progress and development was like; they resented Alexander III?s reactionary rule. It was Alexander's determination to return to dominant Tsarist control that bequeathed Russia a revolution. By the end of Alexander III's reign there was no doubt that Autocratic power had been re-established. All of Alexander II's social and political progress had been eradicated and modernisation halted. 'Russia was now the most repressive state in all Europe'. Alexander III did not have the ability to foresee that the causes he cared for and the means by which he obtained them caused the eventual destruction of the way of life and government he wished to preserve. His repressions helped set into motion the events that would eventually take Russia to the brink of revolution. Unrest had built under Alexander III and what seemed to be the government's ability to keep control was actually just a temporary solution to a much wider problem. Those who wanted change knew that they would have to take it, as they could not expect major reform to come from the government of Russia. The desire for change began before Alexander III stepped onto the throne. He just completed the journey already set in motion by Alexander II's liberal reforms. ...read more.