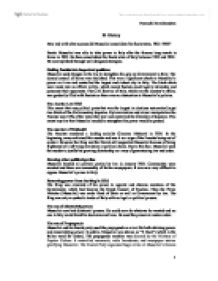 How and with what success did Mussolini consolidate his fascist state, 1922-1930?

IB History How and with what success did Mussolini consolidate his fascist state, 1922-1930? Benito Mussolini was able to take power in Italy after the famous long march in Rome in 1922. He then consolidated his fascist state of Italy between 1922 and 1930. He accomplished through well-designed strategies. Getting fascists into important positions Mussolini used changes in the law to strengthen his grip on Government in Italy. The elected council of Rome was abolished. This was a significant check to Mussolini's power as it ran and controlled the largest and richest city in Italy. The black shirts were made into an official militia, which meant fascists could legally intimidate and persecute their opponents. The Civil Service of Italy, which ran the country's affairs, was gradually filled with fascists so there was no obstruction to Mussolini's policies. ...read more.

Banning other political parties Mussolini banned all political parties by law in January 1925. Communists were arrested and there was censorship of Italian newspapers. It was now very difficult to oppose Mussolini's power in Italy. Removing power from the king in 1925 The King was removed of his power to appoint and dismiss members of the Government, which had become the Grand Council of Fascism. Then the Prime Minister (Mussolini) was made Head of State as well as Government by law. The King was only a symbolic leader of Italy with no legal or political powers. The use of dictatorial powers Mussolini now had dictatorial powers. He could now do whatever he wanted and no one in Italy could block his decisions and laws. ...read more.

Compromise with the church Mussolini made a compromise with the church, which had been unsuccessful for the previous governments. In February 1929 Mussolini concluded the Lateran Treaty with Pope Pius XI. Under the treaty, Italy recognized the independent sovereignty of the Vatican, paid reparations for the loss of autonomy the Vatican suffered in the 19th century, and made Roman Catholicism the official state religion. The dictator thereby broke with the western liberal tendency to separate church and state. In turn, the Catholic Church supported Mussolini's regime more or less officially. The Catholic hierarchy was especially enthusiastic about Mussolini's attempts to raise Italian birth rates and his antifeminist acts, including laws that made abortion a heavily punished crime against the state and regulations discouraging women from working. ?? ?? ?? ?? Ponmuhil Ravichandran 1 ...read more.