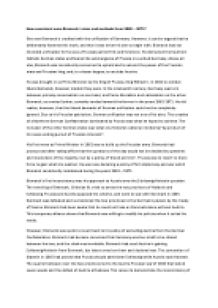 How consistent were Bismarcks aims and methods from 1862 1871?

﻿How consistent were Bismarck?s aims and methods from 1862 ? 1871? Otto van Bismarck is credited with the unification of Germany. However, it can be argued that he deliberately fostered this myth, and that it was never his aim to begin with. Bismarck had not intended unification for he was a Prussian patriot first and foremost. He distrusted the Southern Catholic German states and feared the submergence of Prussia in a united Germany. Above all else, Bismarck was consistently concerned to uphold and to extend the power of the Prussian state and Prussian king, and, to a lesser degree, to exclude Austria. He was brought in as Prime Minister by the King of Prussia, King William I, in 1862 to combat liberal demands, however modest they were. ...read more.

Prussia was to resort to brute force to gain what she wanted. He was now declaring a policy of firm diplomacy and war which Bismarck consistently maintained during the years 1862 ? 1871. Bismarck?s first inconsistency was his approach to Austria over the Schleswig-Holstein question. The new king of Denmark, Christian IX, tried to annex the two provinces of Holstein and Schleswig. Prussia and Austria opposed the scheme, and went to war with Denmark in 1864. Denmark was defeated and surrendered the two provinces to the Germanic powers by the treaty of Vienna. Bismarck had been aware that he could not take on Denmark alone without Austria. This temporary alliance shows that Bismarck was willing to modify his policies when it suited his needs. However, Bismarck was quick to revert back to his policy of excluding Austria from the German Confederation. ...read more.

Prussia declared the German Empire, or Second Reich, on January 21, 1871. Bismarck became chancellor of Germany and also Prime Minister of Prussia. His title was defined in the Constitution of 1871. Bismarck had created a united German national state, although it is debatable whether German nationalism or Prussian power was more important in his campaign. Therefore I believe that he was consistent in his aim of extending the power of Prussia, because the North German Confederation can be described as little more than an extension of Prussia and Prussian power. In conclusion, I believe that Bismarck was generally consistent in his aims, and only modified them to suit his needs. This was demonstrated by his alliance with Austria to defeat Denmark, and then turning on them in the Seven Weeks War. His method of ?blood and iron? remained a consistent aspect in his aggressive foreign policy, especially in the years 1862 to 1871. ...read more.