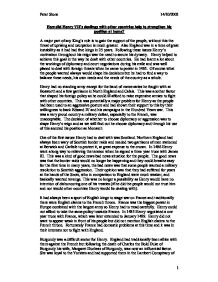 How did Henry VII's dealings with other countries help to strengthen his position at home?

How did Henry VII's dealings with other countries help to strengthen his position at home? A major part of any King's role is to gain the support of the people, without this the threat of uprising and usurpation is much greater. Also England was in a time of great instability as it had had five kings in 25 years. Following these issues Henry's motivation throughout his reign was the need to secure his dynasty. Henry helped to achieve this goal in the way he dealt with other countries. He had learnt a lot about the workings of diplomacy and court negotiations during his exile and was well placed to deal with foreign threats when he came to power in 1485. Of course what the people wanted always would shape his decisions but he had to find a way to balance these needs, his own needs and the needs of the country as a whole. Henry had no standing army except for the band of mercenaries he fought with at Bosworth and a few garrisons in North England and Calais. This was another factor that shaped his foreign policy as he could ill afford to raise expensive armies to fight with other countries. This was potentially a major problem for Henry as the people had been used to an aggressive posture and had shown their support to this by their willingness to back Edward IV and his campaigns in the Hundred Years war. ...read more.

mutual advantage to their trade; * That neither side would assist France or sign an alliance or treaty with France without the agreement of the other and * that betrothal negotiations for the eventual marriage of Arthur and Catherine would proceed. Before I continue with the Brittany issue I will outline how this treaty benefited the English people in relation to the question. The first point of the treaty is a major benefit to Henry would cut off another avenue of escape for Yorkists or other rebels and would reduce the threat of uprising thus strengthening his position. The second point is a massive, but necessary, commitment for Henry to make. With the power of Spain behind England the threat of invasion decreases, the people feel safer and again Henry's position is strengthened. Easier trade is always good especially with such an economically viable country as Spain and would improve relations further, with English and Spanish people interacting on a regularly basis. The next treaty point I will leave to later in the essay as it has relevance to Brittany. Finally a marriage between two countries as stated in the last point seals the relationship and unites them in a way that cannot be broken Point 4 of the treaty above gives Brittany a much better chance of surviving against France and combined with point 2 it all but guaranties Brittany two allies. ...read more.

Fortunately as Henry had retained some independence relations with France were not damaged. Henry now found himself on amicable or better terms with most of Europe almost completely removing the threat to him. Relations with France were strengthened when the treaty of Etaples was renewed with the new king of France, Louis XII, in 1498. Henry, almost for the first time in his reign looked secure. Also Arthur had reached the age of consent in 1500, he married Catherine by Proxy and then later in 1501 in person massively strengthening Anglo-Spanish relations. Tragically Arthur died in 1502 leaving a 16 year old widow. In the following years Henry's foreign policy deteriorated for reasons beyond his control. The death of his son was the catalyst for this decline however the best aspects did remain such as peace with Scotland and France. From the start of the reign till 1502 Henry's foreign policy was exemplary. What other countries did with powerful armies he accomplished through diplomacy. By 1502 he had removed almost all the threats to his position and it was at this time that he was at his strongest, in the terms of his position. He had only gone into military action with other countries twice. In effect Henry's foreign policy strengthened his position at home and England's in Europe with three main aspects. His treaty with Scotland, Spain and France, which enabled him to bring a relative stability to England. Peter Stone 14/10/2002 1 ...read more.