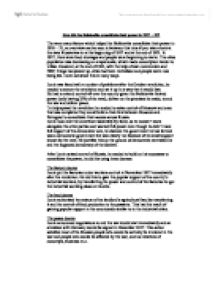 How did the Bolsheviks consolidate their power in 1917 - 21?

How did the Bolsheviks consolidate their power in 1917 - 21? The were many factors which helped the Bolsheviks consolidate their power in 1918 - 21, an overview can be seen in between this time if you take a look at the state Russia was in at the beginning of 1917 and at the end of 1921. In 1917, there were food shortages and people were beginning to starve. The cities population was decreasing on a rapid scale, which made conscription harder to utilise. However, at the end of 1921, with the help of war communism and NEP, things had picked up, cities had been revitalised and people were now being fed. Lenin achieved this in many ways. Lenin was faced with a number of problems after the October revolution, he needed to secure the revolution and set it up in a way that it would last. He had to extend control all over the country given the Bolsheviks limited power (only having 25% of the vote), deliver on the promises he made, to end the war and deliver peace. To help spread the revolution he needed to seize control of Moscow and once that was completed they could build a train link between Moscow and Petrograd to consolidate their access across Russia. Lenin took over the constituent assembly by force, as he couldn't work alongside the other parties and wanted full power even though he didn't ...read more.

leadership qualities of Lenin, the assistance of Trotsky's Red Army and the Bolsheviks ruthlessness throughout the war (the red terror and Cheka.) Although the Bolshevik situation seemed desperate in 1919, it appears that the white armies could not take advantage and their weaknesses were the main cause for Bolshevik victory, as the lack of communication and co-operating between each other allowed the Bolsheviks shift from one front to another and to attack each thread of the white army in turn. Also, before the revolution of 1917, most of the defence industries were located in Tsarist Russia (Petrograd) and so when the Bolsheviks achieved power they inherited virtually all the vast stores of war materials. This meant the whites had a great dis-advantage and limited defence capacity. With the exception of Finland (where the whites won) Russia was firmly in the hands of the Bolsheviks at the end of 1921 although it was achieved at tremendous cost as industrial production was low and over 5 million people had died from famine. (Due to the workers proved unable to run factories and farms effectively) Adding to the vast number of opponents the Bolsheviks had in the civil war, they were faced with allied intervention at the same time. This was a number of countries including the Czech legion, Poland, Ukraine, and especially Britain and France (Britain and France got involved in allied intervention mainly due to the Brest - Litovsk treaty sighed by the Bolsheviks in 1918). ...read more.

This was met with great surprise but due to the overall strength of power, the Bolsheviks supported him. Lenin introduced Russia to the April thesis; this was an attempt to gain support from the people of Russia. It included slogans such as "all power to the soviets" and "peace, bread, land" this was the first real time Lenin had showed his true leadership skills and talent. Lenin had the leadership qualities to make the revolution happen. His ability to analyse situations and take tough decisions is best shown by the treaty of brest Litovsk which Lenin accepted despite the harsh terms laid down by Germany (against Trotsky's wishes), because, if not accepted, Germany would continue taking territory by force. His ideological flexibility or pragmatism can be best seen by his abandonment of war communism and the introduction of the NEP in 1921, which helped consolidate Bolshevik rule. If Lenin was not included (or even as leader) as part of the Bolshevik party, many factors which took place between 1917-21 may not have been possible, the revolution would most probably not have happened in the first place. Although Lenin leadership qualities played a large part in consolidating the Bolshevik power, one of the most important factors must be the weakness of the white army. This was a decisive factor and it is surprising that it took 3 years to win the war considering the enormous advantages. ...read more.