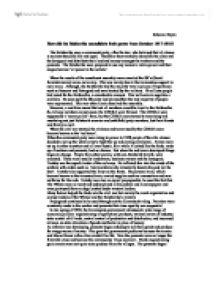 How did the Bolsheviks consolidate their power from October 1917-1924?

Rebecca Hayes How did the Bolsheviks consolidate their power from October 1917-1924? The Bolsheviks were a communist party, after the tsar, who believed that all classes in society should be fair and equal. Therefore they wanted to demolish the elites and the bourgeois and distribute their land and money amongst the workers and the peasants. The Bolsheviks were prepared to use any means to retain power and their slogan became 'all power to the soviets'. When the results of the constituent assembly were revealed the SR's (Social Revolutionaries) came out on top. This was mainly due to the tremendous support in rural areas. Although, the Bolsheviks had the majority vote in places of importance such as Moscow and Petrograd and were backed by the military. 10 millions people had voted for the Bolsheviks, a considerable amount. ...read more.

But when the red terror developed things began to change. People from other parties, with non-Bolshevik beliefs, were executed. These were usually landowners, business owners and the bourgeois. Trotsky was the superb leader of the red army. He inflicted fear into the minds of the soldiers with orders such as, 'every soldiers who voluntarily deserts his post will be shot'. Trotsky also supported the army on the fronts. His personal train, which became known as the armoured train, carried supplies such as ammunition and new uniforms for the reds. Trotsky was also an expert propagandist, he used the fact that The Whites were so weak and undisciplined in his posters and in newspapers and even portrayed them as dogs leashed under western leaders. Many factors helped the Reds win the civil war but mainly the weak organisation and corrupt leaders of the Whites lead the Bolsheviks to victory. ...read more.

People were forced to work and were subjected to military discipline. Even so, industrial and agricultural outputs seriously declined. Grain requisitioning had led to less production and widespread famine, and nationalization had not stopped the decline of industry. Extreme inflation had led to the virtual disappearance of money. In the winter of 1920-1921 a drought-induced famine, general material hardship, growing peasant resistance to grain requisitioning, and general opposition to unpopular government policies led to widespread strikes and uprisings, to which the regime responded with more repression. In March 1921 the sailors at the Kronshtadt naval base, who previously had been allies of the Bolsheviks, staged a revolt against the regime's economic policies and repression of workers' strikes. In late 1921 War Communism was abandoned and Lenin introduced the New Economic Policy (NEP). The NEP relaxed government control and allowed the bourgeois to return in order to encourage economic recovery, although the state remained in control of large companies. CONC SOCIALIST COUNTRY AT WHAT COST? ...read more.