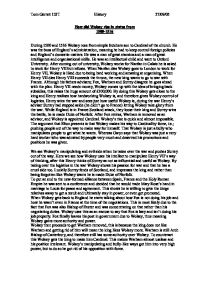 How did Wolsey rise in status from 1500-1516 During 1500 and 1516 Wolsey rose from simple butchers son to Cardinal of the church. He was the boss of England's administration, meaning he had to keep control foreign policies and England's domestic matters. He was a man of great stamina and a man of great intelligence and organisational skills. He was an intellectual child and went to Oxford University. After coming out of university, Wolsey works for Nanfan in Calais he is asked to work for Henry VII but refuses. When Nanfan dies Wolsey goes to London to work for Henry VII, Wolsey is liked due to being hard working and amazing at organising. When Henry VII dies Henry VIII succeeds the throne, the new king wants to go to war with France. Although his fathers advisers; Fox, Warham and Surrey disagree he goes ahead with the plan. Henry VII needs money, Wolsey comes up with the idea of bringing back subsidies, this raises the huge amount of �100,000. By doing this Wolsey gets close to the king and Henry realises how hardworking Wolsey is, and therefore gives Wolsey control of logistics. ...read more.

By taking over the logistics in the war Wolsey shows his passion for war and that he has a cruel side too. Luckily Surrey fends of Scotland, and impresses the king and rather than being forgotten like Wolsey wants he is made Duke of Norfolk. To put an end to the new-formed alliance between Spain, France and the Holy Roman Empire he was sent to a conference and decided that he would trade Mary Rose's hand in marriage to Louie for peace and agreement. This shows he is willing to give the kings relatives away to get a result and ultimately stay in power, or even get promoted. When Wolsey gets back to England he starts talking about how Fox is not doing his job and how he wasn't even in France at the time of the negotiations. This is most likely due to the fact that Fox was also Bishop of Exeter and was concentrating on that rather than his negotiating duties. Wolsey uses this as an excuse to say that Fox is lazy and isn't doing his job properly. ...read more.

As a result he wins the war against France. When Wolsey comes back to England he finds Fox to be old and encourages him to retire, so he can relax after such a long time serving the king. Fox agreed that he was old and should stop work. For such good work the king makes Wolsey, Cardinal. Warham is bitter about this, as he does not like the way in which Wolsey operates. Wolsey then proceeds to stop the illegal happenings of Warham and gets revenue from Warham's property. We can see that both views can make sense, but I feel that Wolsey made it to the top by a mix of the two. I think that he was genuinely hard working and clever, but also encouraged people to leave the government. This way of thinking is more believable than someone who was totally evil or perfect. It was likely that if you did something good for the king every so often he would promote you, and this is exactly what happened. Therefore if you bring Elton's and Gwyn's ideas together then you are more likely to get a true representation of what Wolsey was really like and how he got his high status. ?? ?? ?? ?? Tom Gerrett 12JT History 27/09/05 ...read more.