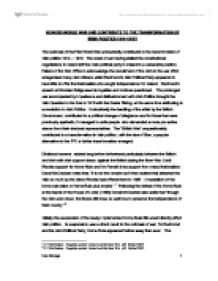 HOW DID WORLD WAR ONE CONTRIBUTE TO THE TRANSFORMATION OF IRISH POLITICS 1914-1918?

HOW DID WORLD WAR ONE CONTRIBUTE TO THE TRANSFORMATION OF IRISH POLITICS 1914-1918? The outbreak of the First World War undoubtedly contributed to the transformation of Irish politics 1914 - 1918. The onset of war having stalled the constitutional negotiations in Ireland left the main political party in Ireland in a vulnerable position. Failure of the War Office to acknowledge the recruitment of the Irish to the war effort antagonised many Irish citizens whilst Redmond's Irish Political Party appeared to have little to offer the Nationalists who sought independence for Ireland. Redmond's speech at Wooden Bridge saw his loyalties and motives questioned. The prolonged war accompanied by impatience and disillusionment with Irish Politics brought the Irish Question to the fore in 1916 with the Easter Rising at the same time attributing to a revolution in Irish Politics. Undoubtedly the handling of the affair by the British Government, contributed to a political change of allegiance and for those that were previously apathetic; it managed to unite people who demanded a more pro-active stance from their electoral representatives. The "British War" unquestionably contributed to a transformation in Irish politics; with the rise of Sinn, a popular alternative to the IPP, a further transformation emerged. Divisions however, existed long before beforehand particularly between the British and Irish with Irish support drawn against the British during the Boer War; Cecil Rhodes support for Home Rule and for Parnell drew support from many Nationalists; Donal McCracken notes that, "it is not the empire as it then existed that attracted the Irish so much as the vision Rhodes had offered them in 1888 - imperialism of the home rule stripe or Home Rule plus empire."1 Following the defeat of the Home Rule at the hands of the House of Lords (1893) ...read more.

the Rising was to prove much more significant and instrumental in altering Ireland's political history whilst attributing to divisions and negotiations that would affect both British and Irish for decades to come. The British Government's handling of the insurgents greatly influenced and altered Irish Politics. Joseph Lee perceives, "The insurrection of 1916 was a desperate gamble. Remarkably it paid off, largely because the British execution of the rebels outraged a previously indifferent population."13 The repercussion of the rebellion was handed over to the army by Asquith. A draconian policy of imprisonment or internment accompanied by wholesale arrests and executions was to follow. Alvin Jackson states that, "What this rather crude but not particularly brutal reaction achieved was an active sympathy for militant nationalism where often only a passive interest had existed ... this sequence of actions could not have been better calculated to endorse revolutionary nationalism"14 Whilst Pauric Travers comments that "The executions replenished the national pantheon of martyrs in a way which death in combat would never have done."15 Internment camps, however, gave nationalists the emotional incentive acting as revolutionary academies providing opportunities for political education whilst allowing valuable contacts to be made. Alvin Jackson suggests, as in the past with the Fenian rising in 1867 and the Clan na Gael bombers in the 1880's "Irish parliamentarians had been far enough removed from the British Government but close enough to militant factions to benefit from both."16 Alan O'Day adds that "the detention of suspected sympathisers during the next few weeks increased hostility towards Britain, hardening popular opinion and damaging the standing of Redmond and the Irish Party."17 War contributed to a "knock on" effect between Irish and British politics. ...read more.