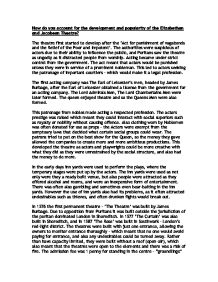 How do you account for the development and popularity of the Elizabethan and Jacobean Theatre?

How do you account for the development and popularity of the Elizabethan and Jacobean Theatre? The theatre first started to develop after the 'Act for punishment of vagabonds and the Relief of the Poor and Impotent'. The authorities were suspicious of actors due to their ability to influence the public, and Puritans saw the theatre as ungodly as it distracted people from worship. Acting became under strict control from the government. The act meant that actors would be punished unless they were in service of a prominent nobleman. This led to actors seeking the patronage of important courtiers - which would make it a legal profession. The first acting company was The Earl of Leicester's men, headed by James Burbage, after the Earl of Leicester obtained a license from the government for an acting company. The Lord Admirals Men, The Lord Chamberlains Men were later formed. The queen enjoyed theatre and so the Queens Men were also formed. This patronage from nobles made acting a respected profession. ...read more.

Rather than have capacity limited, they were built without a roof (open-air), which also meant that the theatres were open to the elements and there was a risk of fire. The admission fee was 1 penny for standing in the centre - "groundlings" and seats on the balconies were more expensive. The theatres allowed for a safer place to show plays as undesirables could not enter. Also the large capacity and the cheap admission for groundlings meant that many people could enjoy the plays, while those who were of a higher social level could still enjoy the same plays on the balconies, while everyone still had the same quality as the theatres were built like amphitheatres. These permanent fixtures meant that people could go and enjoy the theatre regularly. With the establishment of these permanent theatres there was more work available for writers, encouraging more people to write and more talent. The first generation of successful writers were the university wits who were a group of dramatists who transformed theatre with their quality and diversity of plays, and were so named because they were graduates from Cambridge and Oxford. ...read more.

Theatres needed a license from the Master of the Revels before they could legally open. Plays were censored due to politically sensitive or offensive material - especially against the church as blasphemy was forbidden. However not everyone enjoyed the theatres and there was opposition. Puritans had always opposed the plays as they believed it was a distraction from worshiping god, and also encouraged sin. The city authorities also opposed the plays as they were shown in the afternoon, therefore often taking employees away from their work. Respectable citizens also had more objections, due to the rise in crime, the fighting, drinking, and the nature of some plays. Also a major objection to theatres was because of the risk of the spread of the Bubonic Plague, as there were many people packed into a small space. The development and popularity of theatre was due to the way it appealed to all audiences, as the theatres allowed for entrance of people from all ranges of the social structure, and the plays were written on different levels that everyone could enjoy. ...read more.