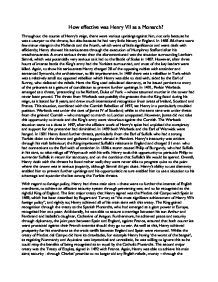 How effective was Henry VII as a monarch?

How effective was Henry VII as a Monarch? Throughout the course of Henry's reign, there were various uprisings against him, not only because he was a usurper to the throne, but also because he had very little history in England. In 1485-86 there were few minor risings in the Midlands and the North, which were of little significance and were dealt with efficiently; Henry showed his seriousness through the execution of Humphrey Stafford after his treacherousness. A more serious threat than the aforementioned was the situation surrounding Lambert Simnel, which was potentially very serious as it led to the Battle of Stoke in 1487. However, after three hours of intense battle the King's army had the Yorkists surrounded, and most of the key leaders were killed. Again, to show his seriousness Henry charged 28 of the opposing nobles with attainder and sentenced Symonds, the orchestrator, to life imprisonment. In 1489 there was a rebellion in York which was a relatively small tax opposed rebellion which Henry was able to deal with, aided by the Earl of Surrey, who defeated the rebels. Here the King used calculated clemency, as he issued pardons to many of the prisoners as a gesture of conciliation to prevent further uprisings. ...read more.

As well as this, Henry achieved prosperity for his merchants as the trade tariffs between England and Spain were removed. Whilst the treaty of Medina del Campo did have its drawbacks, for example Henry having 'the worst of the bargain', as regaining Normandy and Aquitaine was impractical and unrealistic, he was willing to ignore this so he could reap the benefits of being recognised as an equal by the Catholic Monarchs. The second major treaty was the Treaty of Etaples, signed in 1492 with France. Again, Henry was able to achieve his main aims; security - through Charles' promise to no longer aid any English rebels, money - through the sizeable annual pension from �5000, and recognition as a good monarch, as he was able to establish good terms with France, who had been a traditional enemy of England. The third major treaty was signed with Scotland in 1497, the Truce of Ayton established good terms between England and Scotland, who, like France, had been traditional English enemies for centuries. The main outcomes of this truce were that Henry was able to secure his position, through James IV's promise not to aid any more rebels, and through a marriage seal between James and Henry's eldest daughter, Margaret. ...read more.

All of these policies that were put in place may suggest that Henry had an agenda to deliberately quell the nobility, however it has been argued that nobles still enjoyed much wealth and not much changed for them. I support the view that Henry was conscious of the noble's threat and took the appropriate measures to make sure that they did not step out of line, however, I do not believe that he followed an anti-noble policy as such. In terms of effectiveness, Henry certainly managed to curb the nobility's power, through these various policies, the most important, perhaps, being his financial threats against the nobles, which acted as an example to anybody else who was thinking of abusing their position. In conclusion, the King managed to effectively deal with all rebellions that he came across; although some threats were potentially dangerous he was able to deal these, overall, in a very efficient manner. Similarly, Henry's foreign policy was able to achieve his main aims, with security being the most important of these. Lastly, the King developed several policies that effectively limited the power of the nobility in such a manner that he was able to diminish potential threats. These points being considered, Henry was a very efficient monarch when taking into consideration the instability of his position. ...read more.