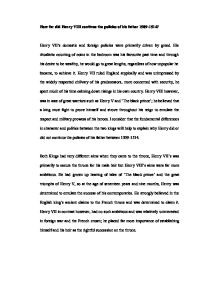 How far did Henry VIII continue the policies of his father 1509-1514? Henry VII's domestic and foreign policies were primarily driven by greed. His ritualistic counting of coins in the bedroom was his favourite past time and through his desire to be wealthy, he would go to great lengths, regardless of how unpopular he became, to achieve it. Henry VII ruled England atypically and was unimpressed by the widely respected chilvary of his predecessors, more concerned with security, he spent much of his time calming down risings in his own country. Henry VIII however, was in awe of great warriors such as Henry V and 'The black prince'; he believed that a king must fight to prove himself and strove throughout his reign to emulate the respect and military prowess of his heroes. I consider that the fundamental differences in character and politics between the two kings will help to explain why Henry did or did not continue the policies of his father between 1509-1514. Both Kings had very different aims when they came to the throne, Henry VII's was primarily to secure the throne for his male heir but Henry VIII's aims were far more ambitious. ...read more.

Henry VII's desire for money bordered on an obsession for him and he even threatened, though never planned to follow up, war with France in the 'October war' in order to get a regular pension if he promised not to invade. He was meticulous with money and taxed whenever he could, perhaps the main reason he was so uninterested in war was because it was so expensive. Henry VIII in stark contrast however was very extravagant and felt the best way money could be spent was on war. He had very little interest in the administrative side, he loathed writing letters and persuading him to write his signature was a taxing situation for his council. Henry VIII ' allowed his council the freedom to initiate policy on many matters, far more so than Henry VII'. As a much younger king he indulged in sports such as jousting and hunting and spent little time contemplating policy. Through his love of sports he had exposure to many of the nobles and it helped him create good relations with them. It was in fact the nobles' influence, which encouraged Henry's desire for the French crown, something his father had shown little interest in. ...read more.

As Henry VIII's 'reign unfolded, he added 'imperial' concepts of kingship to existing 'feudal' ones' and he strove to give meaning to the words 'Rex imperator', unheard of since the Roman empire and it is I consider through these chivalrous dreams that he went to war with France and Scotland in 1513. Henry VII and Henry VIII had very different ideas of what was expected from a king and I consider that although 'Henry VII had restored stability and royal authority, it may have been for reasons of character as much as policy that his son resolved to augment his regal power'. Henry VII desire for stability and money meant that he had little interest in the danger and expense of war, his son's more traditional views and imperialistic concepts of kingship craved recognition's a great warrior like his hero Henry V. These differences explain the very different foreign policies of the kings as well as much of their domestic policies and although Henry did not abolish all his fathers taxes, he did destroy the careful alliances he had built up through his reign. For these reason therefore I consider that Henry VIII did not continue the policies of his father to a great extent, if at all and that their fundamental principles and politics varied greatly. Michelle Eskinazi L65HDH ...read more.