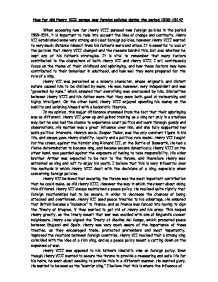 How far did Henry VIII persue new foreign policies during the period 1509-1514?

How far did Henry VIII persue new foreign policies during the period 1509-1514? When accessing how far Henry VIII pursued new foreign policies in the period 1509-1514, it is important to take into account the idea of change and continuity. Henry VII established some very strong and clear foreign policies, however Henry VIII wanted to very much distance himself from his father's work and ethos. It is essential to look at the policies that Henry VIII changed and the reasons behind this, but also whether he kept any of his father's strategies. It is vital to remember that many factors contributed to the characters of both Henry VII and Henry VIII. I will continuously focus on the theme of their childhood and upbringing, and how these factors may have contributed to their behaviour in adulthood, and how well they were prepared for the role of a king. Henry VII was perceived as a miserly character, whose enigmatic and distant nature caused him to be disliked by many. He was, however, very independent and was "governed by none," which ensured that everything was overlooked by him. Similarities between Henry VIII and his father were that they were both good at networking and highly intelligent. ...read more.

Henry VIII was brought up with the idea that past family members, in particular Henry V, were extremely victorious in wars. This affected Henry so much, that not only did he want a parallel glory to Henry V, but he also commissioned a translation of a book about Henry V's early life. Henry VIII was also made aware of the fact that it was only 80 years since Henry VI had been crowned king of France, which meant that according to him, he rightfully inherited the French crown. Unlike his father's peace policy, Henry believed in a more traditional interventionist policy. Henry wanted prestige and military glory, which he gained when winning the battle of the spurs. This was very successful through Henry's eyes, as it was the first territorial gain in France for 75 years, and did much to heighten his popularity. Henry persued this idea of being militarily successful, but I do not believe he achieved this. Henry was in France whilst James IV was victorious at Flodden, which made Henry's gains become overshadowed by James IV victory in England. Even though this was a victory for England, it is questionable as to whether it was a victory for Henry. ...read more.

It is thought that Henry VII was hanging by a thread, and by the end of his rule was not at all secure. Henry VIII wanted to distance himself from this, and expectations were upon him to act differently to his father. He persued foreign polices that were dissimilar to Henry VII's, and, apart from the idea of continuing and securing the Tudor dynasty through arranged marriages, every other policy was a contrast. I believe that this is due not only to society expectations at the time, but also Henry VIII had clear expectations for himself from an early age. Growing up in the shadow of his older brother's legacy may have been difficult for Henry, and so when he was given the power, he used it to the maximum, always with full determination, sometimes with naivety. As a child, he was constantly thinking of the past generations, and their glory and patriotism, and how they were respected and adored, usually due to their military connections. It is no surprise that Henry VIII persued the foreign policies that he did. Regardless of whether they were successful or not, he did everything in his power to follow his own path, and neglect his father's legacy. ?? ?? ?? ?? ...read more.