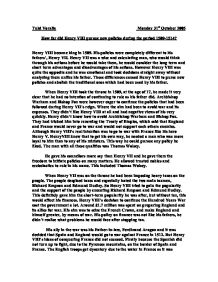 How far did Henry VIII pursue new policies during the period 1509-1514?

Tulsi Voralia Monday 31st October 2005 How far did Henry VIII pursue new policies during the period 1509-1514? Henry VIII became king in 1509. His policies were completely different to his fathers', Henry VII. Henry VII was a wise and calculating man, who would think through his actions before he would take them, he would consider the long term and short term advantages and disadvantages of his actions. However Henry VIII was quite the opposite and he was emotional and took decisions straight away without analyzing them unlike his father. These differences caused Henry VIII to purse new policies and abolish the traditional ones which had been used by his father. When Henry VIII took the throne in 1509, at the age of 17, he made it very clear that he had no intention of continuing to rule as his father did. Archbishop Warham and Bishop Fox were however eager to continue the policies that had been followed during Henry VII's reign. Where the aim had been to avoid war and its expenses. They didn't like Henry VIII at all and had negative views of his very quickly. ...read more.

This definitely gave him the short-term popularity he was after, but without tax, this would affect his finances. Henry VIII's decision to continue the Hundred Years War cost the government a lot. Around �1.7 million was spent on preparing England and its allies for war. His aim was to seize the French Crown, and make England and himself greater, by means of war. His policy on finance was not like his fathers, he didn't realise what problems he would face after stopping tax. His ally in the war was his Father-in-law, Ferdinand Aragon and it was decided that Spain and England would go to war against France in 1512. But Henry VIII's ideas of conquering France did not succeed. Firstly because the Spanish did not turn up to fight, due to the Pyrenees mountains, on the border of Spain and France. The English troops get dysentery due to the water in France as it was contaminated. Even though Henry VIII failed to attack France, this didn't prevent him from trying again. In 1513, Henry VIII decided to attack France again, this time with the help of Maximilian who was the Holy Roman Emperor. ...read more.

Henry VII's council was left unchanged. However Henry VIII gave the councilors more freedom, i.e. He allowed them to take some decisions, whereas Henry VII would have only taken advice, and wouldn't allow any of the councilors to take any decisions. Henry VII collected taxes as a financial policy, this was called Ordinary Revenue, he also used the Acts of Attainder by which he could seize a persons title and all their belongings if they were declared for a crime against the throne, usually treason. Henry VIII on the other hand pursued no new policies about finance, and instead he abolished the Ordinary Revenue policy. Henry VII used the idea of treaties to get his own way, for example he ordered a trade embargo which caused the signing of the Magnus Intercursus which meant that Burgundy could not harbor Yorkist claimants. However Henry VIII took a more dramatic action and went to war to get his own way and as a result a deal was signed in the end. This shows that both Henry VII and Henry VIII wanted a deal to be signed but both had different methods to get to their destination. This shows that Henry VIII pursued a new policy on International relations. ...read more.