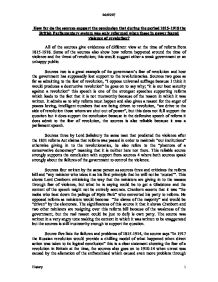 How far do the sources support the conclusion that during the period 1815-1918 the British Parliamentary system was only reformed when those in power feared violence of revolution?

How far do the sources support the conclusion that during the period 1815-1918 the British Parliamentary system was only reformed when those in power feared violence of revolution? All of the sources give evidences of different view at the time of reform from 1815-1918. Some of the sources also show how reform happened around the time of violence and the threat of revolution; this would suggest either a weak government or an unhappy public. Sources two is a great example of the government's fear of revolution and how the government has supposedly lost support to the revolutionaries. Sources two goes as far as admitting to the fear of revolution, "I oppose universal suffrage because I think it would produces a destructive revolution" he goes on to say why; "it is our best security against a revolution" this speech is one of the strongest speeches supporting reform which leads to the fact that it is not trustworthy because of the reason in which it was written. ...read more.

This shows Lord Cranborn criticizing the way that the ministers are giving in to the masses through fear of violence, but what he is saying could be to get a Gladstone and the content of the speech might not be entirely accurate. Cranborn asserts that it was "the mobs who beat down the palings of Hyde Park" who converted his party to reform. He opposed reform as ministers would become "the slaves of the majority" and would be "driven" by the electorate. The significances of this source it that it shows Cranborn and two other ministers are resigning over this reform bill because of the weakness of the government, but the real reason could be just to defy is own party. The source was written in a very angry tone making the context in which it was written to be exaggerated but the sources is still trustworthy enough to support the question. Source five lists the failures and problems of 1815-1914, the source says "In 1917 the Russian revolution would provide a chilling model of what happened when direct action ...read more.

He also refers to "the scheme of parliament reform in 1917", implying that plans for parliamentary reform were on the agenda before the Russian revolution, all this leads to that fact that it was the fear of violence that caused reform in the end and not the need for change. As this sources is some one opinion and was written in 1994 whether it is reliable or not will effect as to whether it is credible enough to support the question, the evidences suggests that it is reliable but does not fully support the question Each sources provides a clear pattern of how violence over the century had influenced reform but was not always the cause of it. The sources do support the conclusion to the extent that they do provide evidences to suggest that reform was undertakes to prevent violence but reform did occur when their was no threat of at all. Which shows that there was the fear of violence's. 04/05/07 History 1 ...read more.