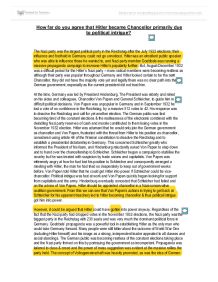 How far do you agree that Hitler became Chancellor primarily due to political intrigue?

How far do you agree that Hitler became Chancellor primarily due to political intrigue? The Nazi party was the largest political party in the Reichstag after the July 1932 elections; their influence and foothold in Germany could not go unnoticed. Hitler was an excellent public speaker who was able to influence those he wanted to, and Nazi party member Goebbels was running a massive propaganda campaign to increase Hitler's popularity further. But, August-December 1932 was a difficult period for the Hitler's Nazi party - more radical members were becoming restless as although their party was popular throughout Germany and Hitler looked certain to be the next Chancellor, they did not have the majority vote yet and legally there was no clear path into the German government, especially as the current president did not trust him. At the time, Germany was led by President Hindenburg. The President was elderly and relied on his aides and colleagues, Chancellor Von Papen and General Schleicher, to guide him in difficult political decisions. ...read more.

Hindenburg eventually conceded that Schleicher had failed and on the advice of Von Papen, Hitler should be appointed chancellor in a Nazi-conservative coalition government. From this we can see that Von Papen's actions in trying to get back at Schleicher for his apparent treachery led to Hitler becoming chancellor & thus political intrigue got him into power. However, it could be argued that Hitler could have gotten into power anyway. Regardless of the fact that the Nazi party had dropped votes in the November 1932 elections, the Nazi party was the biggest party in the Reichstag with 230 seats and was very much the dominant political force in Germany. Goebbels' propaganda was a powerful tool in establishing Hitler as the only man who could take Germany forward. Many people were still bitter about the outcome of World War One (including Hitler himself) and his image as a strong, independent leader appealed to all classes and social standings. ...read more.

It can be said that another reason for Schleicher's actions, bar just being nervous about Von Papen's capability as Chancellor, was so that he himself could seize power and align himself as a hero who brought about national reconciliation. Schleicher ultimately failed and this was favourably received by Von Papen, who convinced President Hindenburg to tell him to step down. Perhaps if Schleicher was successful in stabilising the country Hindenburg would not have listened to Von Papen but in reality the tables were turned and Von Papen had Schleicher removed from power. Hitler was brought into power by the apparently jealous & bitter Von Papen. Had Schleicher been successfully able to appoint Strasser as Vice Chancellor, perhaps the rift in the Nazi party may have gotten so large that the party folded. Hitler became Chancellor due to the mass support the Nazi party had and also due to the failings of Von Papen and Schleicher, but primarily it was because the political backhandedness and power-hungry deviousness of Von Papen. ...read more.

The strength of this essay is in its structure which clearly examines a range of factors and uses excellent detail from the period to support and exemplify the points.

It could have been tightened up by actually labelling the main factors at the start and by developing the argument to focus on the links and relationships between the factors to build on the ideas that they all played some part in Hitler's rise to power. ***