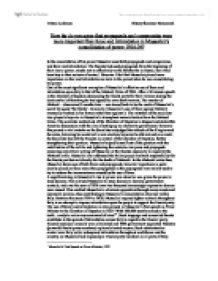 How far do you agree that propaganda and compromise were more important than force and intimidation in Mussolini's consolidation of power 1924-9?

How far do you agree that propaganda and compromise were more important than force and intimidation in Mussolini's consolidation of power 1924-29? In the consolidation of his power Mussolini used both propaganda and compromise, and force and intimidation. The fascists had used propaganda from the beginning of their rise to power, maybe not as effectively as the Bolsheviks in Russia, but it had been key to their seizure of control. However I feel that Mussolini placed more importance on fear and intimidation as tools in the period when he was consolidating his power. One of the most significant examples of Mussolini's effective use of force and intimidation upon Italy is that of the Matteoti Crisis of 1924. After a 30 minute speech in the chamber of deputies denouncing the fascist party for their violence during the elections he left knowing he had signed his own death warrant. The murder of Matteoti - discovered 2 months later - was traced back to be the work of Mussolini's secret hit squad 'the Cheka'. Ironically, Mussolini's use of force against Matteoti eventually worked in his favour rather than against it. The mistakes of the socialists also played a key role in Mussolini's triumphant materialization from the Matteoti Crisis. ...read more.

The King was the sole person who had the power to put an end to Mussolini's March on Rome by sending in the army to take a stand, however the King overestimated the strength of the Fascist forces and feared his intervention may cause a civil war within Italy. The current Prime Minister - Facta was denied his request for martial law by the King, and as a result, resigned from his position and the King was given no alternative but to offer the place to Mussolini. These events, which took place at the March on Rome, were instrumental to Mussolini's rise to power. In order to appear a strong and determined leader, Mussolini relayed his success as the result of pure power in numbers and intimidation. However it appears to be the product of a weak King who made miscalculations regarding the strength of the Fascist movement, "The March on Rome...was a show of strength...this show of strength would have failed if the King had opposed it"2 supporting my point that it was the King's underestimation of the Fascist's strength which created an unwillingness to take action against them. Fear and force has been shown already to have had a huge input into the consolidation of Mussolini's power, however, the question remains as to whether he could have succeeded with those 'tools' alone. ...read more.

One of the most successful forms of propaganda produced by the Fascist party was the Dopolavoro, which was set up in 1925. It was an organisation set up to provide state-sponsored after work entertainment, touring around the country to reach all the Italian people and promote the idea of Fascism. This illustrates aspects of the Fascist regime who's aim was total control over all aspects of the Italian's lives as it aimed to reach people in all parts of the country in order to manipulate their political agendas. The Dopolavoro proved to be very popular with the Italian people and took the fascist ideals to areas where support would have been weak and other ideals still survived underground - this was successful propaganda and contributed largely to the consolidation of power. Mussolini's initial rise to power was brought about by using strong fear and force tactics to bully the Italian people into accepting his almost autocratic role as leader, in a country that had already had an established democracy for a number of years this was quite an extraordinary feat. However the constant use of propaganda, and in places, compromise to portray the deity-like figure of 'Il Duce' must have been equally important in the consolidation and holding of power by the Fascist party and Mussolini. 1 Mussolini's First Speech as Prime Minister, 1922 2 G. Carocci Tristan Lochman History Summer Homework ...read more.