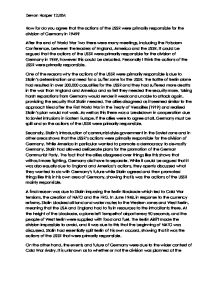 How far do you agree that the actions of the USSR were primarily responsible for the division of Germany in 1949?

A final reason was due to Stalin imposing the Berlin Blockade which led to Cold War tensions, the creation of NATO and the FRG. In June 1948, in response to the currency reforms, Stalin blocked all land and water routes to the Western zones and West Berlin, meaning that the USA and England had to fly in resources to the inhabitants there. At the height of the blockade, a plane left Tempelhof airport every 90 seconds, and the people of West Berlin were supplied with food and fuel. The Berlin Airlift made the division impossible to avoid, and it was due to this that the beginning of NATO was discussed. Stalin had essentially split Berlin of his own accord, showing that it was the actions of the USSR that were primarily responsible. On the other hand, the events and future of Germany were due to the wider context of Cold War rivalry. It is unknown as to whether or not the division was planned at the Potsdam conference or not or if the formal decision to split Germany remained open until a letter from Stalin in 1952. ...read more.

The creation of bi-zonia, meaning two zones, had also split up the country which was not all the USSR's idea, showing that it would be unfair to suggest that it was mainly the actions of the USSR that caused the divide in Germany in 1949. Stalin thought that this was created as an anti-Soviet area and so felt threatened, in response trying to build up his area of Germany for security as a 'buffer' zone. His proposal in 1947 for a German government was rejected in order to stop communism, so to Stalin it would have felt like all of the allies were against him. To conclude, I think that it was the USSR's actions that were primarily responsible for the divide in Germany in 1949 because Stalin didn't respond to problems well. By the Berlin Blockade he made the division inevitable since the US and England had to fly supplies into the area. As well as this he promoted communism in his area when the US had clearly said that was the last thing they wanted and were fully intent on trying to stop communism throughout the world. ?? ?? ?? ?? Devon Harper 12JXM ...read more.

This is a balanced response which considers the key points on both sides of the debate. There could be more specific detail in places, including the use of dates and statistics. Some of the arguments could be developed further. 3 out of 5 stars.