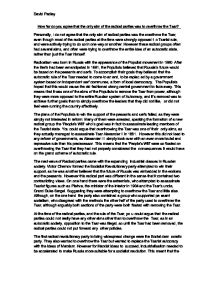 How far do you agree that the only aim of the radical parties was to overthrow the Tsar?

How far do you agree that the only aim of the radical parties was to overthrow the Tsar? Personally, I do not agree that the only aim of radical parties was the overthrow the Tsar, even though most of the radical parties at the time were strongly opposed to Tsarist rule, and were actively trying to do so in one way or another. However these radical groups often had several aims, and often were trying to overthrow the entire idea of an autocratic state, rather than just the Tsar himself. Radicalism was born in Russia with the appearance of the Populist movement in 1860. After the Serfs had been emancipated in 1861, the Populists believed that Russia's future would be based on the peasants and serfs. To accomplish their goals they believed that the autocratic rule of the Tsar needed to come to an end, to be replaced by a government system based on independent serf communes, a form of local democracy. ...read more.

This means that the 'People's Will' were so fixated on overthrowing the Tsar that they had not properly considered the consequences it would have on the grand scheme of autocratic rule. The next wave of Radical parties came with the expanding industrial classes in Russian society. Victor Chernov formed the Socialist Revolutionary party attempted to win their support, as he was another believer that the future of Russia was embedded in the workers and the peasants. However this radical part was different in the sense that it contained two contradicting views. On one hand there were the extremists, who attempted to assassinate Tsarist figures such as Plehve, the minister of the interior in 1904 and the Tsar's uncle, Grand Duke Sergei. Suggesting they were attempting to overthrow the Tsar and little else. Although, on the one hand the party also contained a group who supported peasant socialism, who disagreed with the methods the other half of the party used to overthrow the Tsar, although arguably both sections of the party were both fixated with removing the Tsar. ...read more.

The advancement in the Social Democrat party came with Vladimir Ilyich Ulyanov, later known as Lenin outlined his plan for the creation of a radical part of political revolutionaries who would lead Russia to social revolution in a pamphlet called 'What is to be done?' He too planed to overthrow the Tsar, but thought that revolution could be organised in a scientific way, by studying social and economic factors. Eventually, The pressure applied by the Radical groups and the Social Democratic party, even after it's split into the Mensheviks and Bolsheviks succeeded in overthrowing the Tsar. Therefore I think that ultimately such things must have been their ultimate goal, however I also think that it was the hatred of autocratic Tsarist government that forced the parties into Western Marxist ideas. And so I think that the radical parties of Russia were more concerned with changing the ways of government that overthrowing specifically the Tsar. ?? ?? ?? ?? David Pedley ...read more.