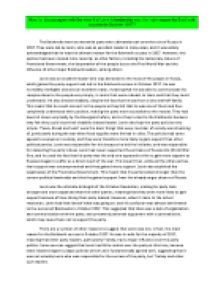 How far do you agree with the view that Lenins leadership was the main reason for Bolshevik success in October 1917?

﻿The Bolsheviks were an extremist party who ultimately took over the rule of Russia in 1917. They were led by Lenin, who was an excellent leader in many ways, and it was widely acknowledged that he was the ultimate reason for the Bolshevik success in 1917. However, this opinion has been revised more recently, as other factors, including the temporary nature of Provisional Government, the desperation of the people due to the First World War and the influence of other major Bolshevik leaders, among others. Lenin was an excellent leader who was attractive to the mass of the people in Russia, which gained the party support and led to the Bolshevik success in October 1917. He was incredibly intelligent and was an excellent orator, meaning that he was able to communicate his complex ideas to the people very simply, in terms that were relevant to them and that they could understand. He also dressed shabbily, despite the fact that he was from a very well-off family. ...read more.

Lenin also exploited the weaknesses of the Provisional Government. This meant that his party looked stronger than the current political leadership and that he gained support from the already angry citizens of Russia. Lenin was the ultimate strategist of the October Revolution, making his party look stronger and more organised than the other parties, meaning that they were more likely to gain support because of how strong their party looked. However, when it came to the actual revolution, Lenin had little idea of what was going on, and his confusion was almost detrimental to the success of Bolsheviks in October 1917. This suggested that there was a lack of organization and communication with the party, and presented potential supporters with a contradiction, which may cause them not to support the party. There are a number of other reasons to suggest that Lenin was not, in fact, the main reason for the Bolshevik success in October 1917. He was in exile for the majority of 1917, meaning that other party leaders, particularly Trotsky, had a major influence over the party politics. ...read more.

There are several other reasons for the success of the Bolshevik party which individually appear to have little to do with Lenin. The Kornilov Revolt made the party look like national patriots, and gained them much support in time for the October revolution. The temporary nature of the Provisional Government was also a contributing factor , who were essentially just ?looking after? the country until a constitutional assembly could be established meant that it was weak. This meant that the ruthless Bolsheviks could easily overthrow this government. It was also the first instance of democratic rule in Russia, which increased the chances of power going to the most flexible and ruthless party; the Bolsheviks. In Conclusion, I feel that Lenin is the ultimate reason for the Bolshevik success in October 1917, despite the fact that there were a large number of contributing factors which he was not responsible for. He was able to make the party seem accessible to the majority of Russians, and took advantage of every possible factor which presented itself to the Bolshevik party, making them look as strong and reliable as physically possible. ...read more.