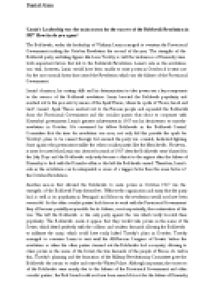 Lenin's leadership was the main reason why the Bolsheviks were able to seize power in October 1917. Discuss this view (50)

Trotsky managed to convince Lenin to wait until the All-Russian Congress of Soviets before the revolution as when the other parties stormed out the Bolsheviks had a majority; allowing to claim power in the name of the Soviet, the true demands of the people of Russia. As well as this, Trotsky?s planning and the formation of the Military Revolutionary Committee gave the Bolsheviks the means to strike and seize the Winter Palace. Although important, the successes of the Bolsheviks were mainly due to the failures of the Provisional Government and other socialist parties; the Red Guard could not have been armed if it not for the failure of Kerensky in the Kornilov affair. Therefore, the revolution was not solely the success of the Bolsheviks, but they were willing to take action once the failures of the Government and the socialist parties had put them in a position to do so. Kerensky?s poor decisions played into the Bolsheviks hands and strengthened the putting them in a position to act against the Provisional Government in October. ...read more.