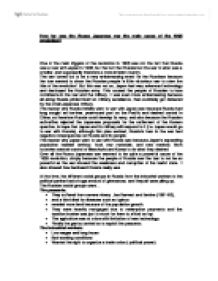 How far was the Russo Japanese war the main cause of the 1905 revolution? One of the main triggers of the revolution in 1905 was not the fact that Russia was at war with Japan in 1905, but the fact that Russia lost the war to what was a smaller, and supposedly therefore a more inferior country. The war turned out to be a very embarrassing event for the Russians because the tsar wanted to show the Russian people 'a little victorious war to stem the tide of the revolution'. But this was not so, Japan had very advanced technology and destroyed the Russian army. This caused the people of Russian to lose confidence in the tsar and the military. It was even more embarrassing because all along Russia prided itself on military excellence, then suddenly got defeated by the small Japanese military. ...read more.

At the time, the different social groups in Russia from the industrial workers to the political parties had a huge amount of grievances, and they all were piling up, The Russian social groups were... The peasants: * They suffered from severe misery , bad harvest and famine (1891-92), * and a third died for diseases such as typhus. * needed more land because of the population growth. * They were heavily mortgaged due to redemption payments and the taxation burden was just to much for them to afford on top. * The agriculture was at a low with limitation of new technology. * Finally the gentry carried on to exploit the peasants. The industrial workers: * Low wages and long hours * Bad working conditions * Wanted the right to organize a trade union ( political power) Middle classes: * Targeted by revolutionary groups * Development continued to be ignored by the tsar * Resented being excluded from having ...read more.

97,000 industrial workers went on strike in 1899. The middle classes and the gentry appealed to the government. The students revolted and caused the disturbances in February 1899. The nationalities kept on pursuing reconciliation. Finally the peoples grievances did play a part in the revolution everyone showed to be unhappy and wanted a change, the grievances formed a base to the causes on the revolution and everything was slowly starting to pile up. Eventually the Russian people new that these grievance were going to be looked at But the social grievances had been going on for a while and were not as shocking as the Russo Japanese war, so in one way you could say yes it was worse that the war and it had been going on for such a long time, but on the other hand it could be seen as 'normal' where as the loss to the war was a shock. The Russian economy wasn't very strong at the time and Russia was being affected by the negativity of the economy ...read more.