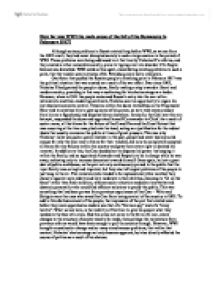 How far was WWI the main cause of the fall of the Romanovs in February 1917?

How far was WWI the main cause of the fall of the Romanovs in February 1917? Although serious problems in Russia existed long before WWI, as we see from the 1905 revolt, they had never disrupted society to such a large scale as in the period of WWI. Those problems were being addressed to at the time by Nicholas II's reforms, and they created a rather vulnerable society, prone to tipping over into disorder if its fragile balance was disturbed. WWI acted as this agent, exacerbating existing problems to such a point, that the trouble-weary citizens of St. Petersburg were led to revolution. One factor that pushed the Russian people to breaking point in February 1917 was the political situation that was created as a result of the war effort. Ever since 1905, Nicholas II had granted the people a duma, finally making a step towards a liberal and modern society, providing in this way a cushioning for his shortcomings as a leader. However, when in 1914 the people welcomed Russia's entry into the war with a nationalistic and Czar-endearing sentiment, Nicholas saw his opportunity to regain his lost absolute autocratic control. Tensions within the duma intensified, as the Progressive Bloc tried to convince him to give up some of his power, so as to take away pressure from him as a figurehead, and disperse blame elsewhere. ...read more.

However, WWI brought around such a change and so many simultaneous problems, that within that context, Nicholas' shortcomings not only became apparent, but also directly affected the course of politics as a result of his choices. Another factor that led to the downfall of the Romanovs was the very circumstances that the war created. Russia could not have avoided entry into WWI, not only because they knew of the existence of the Schlieffen Plan and expected an attack from Germany anyway, but also as a result of previous humiliations, such as the Bosnian Crisis and the Russo-Japanese war, which meant that their imperialistic status would begin to be threatened if they avoided this war too. However, those humiliations very much act as proof that the country's entry into the war was a reckless move, if the economy and the social instabilities are taken into account. The war effort was largely incoherent, with defeats in Tannenberg and the Masurian Lakes leading to losses so great, that they would still cause problems in offensives to follow. In the Great Retreat, 1.5 million men were lost, along with railway lines, fortresses packed with shells, and strategically important cities. Chaos ruled over the front, with irregular supplies, high levels of desertions and a growing worry that there would have to be a call-up from the large agricultural reserve. This was dangerous for several reasons: Firstly, with the ongoing scarcity of food, the last thing that needed to happen was to decrease the people working the land to produce it. ...read more.

would not have closed off Russia's passage into the Black Sea, cutting off 90% of its trade. Although this did not have an effect in 1915, when St. Petersburg was available as a port, the problem became very evident in 1916 to 1917, when this breakdown of trade led to the breakdown of the economy, too. Russia's stability, ever since Alexander II, depended on modernization and industrialization. The war had already paralysed modernization by stopping Stolypin's reforms so as to gear towards a war economy, but the fact that now trade had been cut off too led to consumer goods and the expansion of industry to be stopped too, making for a very irregular market, where prices fluctuated according to the supplies. This situation eventually led to a grain crisis, since the farmers withdrew their supplies from the markets as they could not get a steady price for it. This happened at a time when urban population was rising exponentially, so the effect of this crisis was that the cities were starving, in the midst of a radicalized and concentrated workforce, of which a large percentage was not used to such rigid situations, since it had just recently moved to the city. So what we realize from here, is that so many interlinked problems where the entire country's structure was essentially breaking down were created, that would not have been caused had the war not happened. Russian society, however tough, was not coherent enough to withstand such a complete breakdown and still retaining faith in their system of government. ...read more.