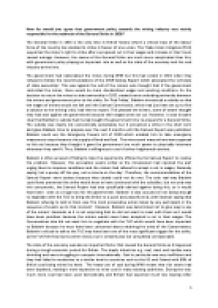 How far would you agree that government policy towards the mining industry was mainly responsible for the outbreak of the General Strike in 1926?

﻿How far would you agree that government policy towards the mining industry was mainly responsible for the outbreak of the General Strike in 1926? The General Strike in 1936 is the only time in British history where a critical mass of the labour force of the country has decided to strike in favour of one union. The Trade Union Congress (TUC) supported the miner?s right to strike after a proposed cut in their wages and increase in their hours caused outrage. However, the causes of the General Strike are much more complicated than this, with government policy playing an important role as well as the state of the economy and the coal industry at the time. The government had nationalised the mines during WWI but this had ended in 1921 when they refused to follow the recommendations of the 1919 Sankey Report which advocated the ?principle of state ownership?. This was against the will of the miners who thought that if the government controlled the mines, there would be more standardised wages and working conditions. ...read more.

Baldwin is also accused of not doing enough to negotiate with the TUC to bring the Strike to a quick and peaceful end, with Seaman saying that Baldwin refusing to talk to them was ?the most provocative action taken by any participant in the sequence of events up to that moment?. However, Baldwin was determined not to give way to any of the miners? demands so it is not surprising that he did not want to meet with them as it would have been pointless because the miners would never have accepted a cut in their wages. The Conservatives also did not want him to negotiate with the TUC which would have been important to Baldwin because he must have been concerned about retaining the unity of the Conservatives. Baldwin?s refusal to talk to the TUC may have been one of the most significant triggers for the strike, as the TUC felt they had no other choice, but it certainly was not completely unreasonable. The state of the economy was also an important factor that caused the General Strike as it happened during a tough economic period for Britain. ...read more.

Cave-ins were common and there were no doctors or nurses to deal with the medical issues of the miners?. The decline of the coal industry in Britain was a hugely significant cause of the strike because it led to declining profits for mineowners which in turn led to them controversially decreasing the wages of their workers. Although many accuse the mineowners of being too concerned with immediate profits and not re-investing enough into their mines to modernise them, if the demand for British coal had not fell so much mine owners would not have had to decrease the wages of the miners, and arguably there would not have been support for the General Strike. While government policy, including Baldwin?s stubbornness, was undoubtedly a critical reason for the outbreak of the strike in 1926, Britain?s backwards methods of mining and the global decline in demand for coal were far more important. THese led to the fall in wages of the miners which was the main trigger for the strike as the bad conditions alone were not enough for the TUC to have supported the miners. Therefore, it appears that decline in the coal industry was the most important cause of the General Strike, with government policy playing a smaller role. ...read more.