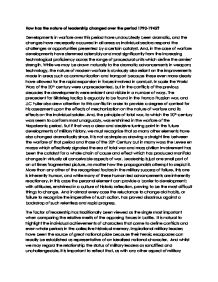 How has the nature of leadership changed over the period 1790-1945?

How has the nature of leadership changed over the period 1790-1945? Developments in warfare over this period have undoubtedly been dramatic, and the changes have necessarily occurred in all areas as individual sectors respond the challenges or opportunities presented by a certain catalyst. And, in the case of warfare developments have stemmed ostensibly and most significantly from the increasing technological proficiency across the range of procedural units which define the armies' strength. While we may be drawn naturally to the dramatic advancements in weapons technology, the nature of modern warfare is obviously also reliant on the improvements made in areas such as communication and transport because these even more clearly have allowed for the rapid expansion in forces involved in combat. In scale the World Wars of the 20th century were unprecedented, but in the conflicts of the previous decades the developments were evident and visible in a number of ways. The precedent for Blitzkrieg tactics is arguably to be found in the Franco Prussian war, and J.C Fuller also drew attention to this conflict in order to provide a degree of context for his assessment upon the effects of mechanization on the nature of warfare and its effects on the individual soldier. And, the principle of total war, to which the 20th century wars seem to conform most unarguably, was enshrined in the warfare of the Napoleonic period. But if that was a clear and decisive turning point in the future developments of military history, we must recognize that so many other elements have also changed dramatically since. It is not as simple as drawing a straight line between the warfare of that period and those of the 20th Century but in many ways the Levee en masse which effectively signaled the era of total war and mass civilian involvement has been the catalyst for a whole chain of cause and effect which has produced manifold changes in virtually all conceivable aspects of war. ...read more.

In the context of chateaux Generalship the physical conditioning of the individual was not a significant issue and it was the distance from the battlefield which allowed for the average age of leaders to creep up gradually. In this period where strategy and long drawn out battle plans were the foundation of military procedure, it was perhaps inevitable that people would come to revere the qualities of associated with age, of experience and an understanding of military tactics founded upon a solid understanding of the history and their own personal experiences The qualities of a good General are inevitably far more difficult to pin down than some would suggest in statements attesting for the singular importance of either youth or experience. The greatest Generals have possessed special human qualities which are vital to ensuring that vast numbers of men will be prepared to fight for the cause that they preach. Communicating the message with the utmost emotional impact relies as I have discussed, upon shared risk, but also on a number of other rare and valuable characteristics which can be found in the likes of Napoleon and Wellington whose military successes have defined eras in their approach. One important task for the General is in communicating their individual passion for the cause and instilling this seem will to succeed in the minds of their men. Napoleon was a leader who very much epitomized a clear cause for which to fight and in many ways his success may have been enabled by the surrounding ideological fervor which reduced the burden of motivation to some extent. The communication of ideas may be aided by remarkable oratory skills, which combined with their individual sense of mystique creates fundamental confidence in the General to lead the men to victory. In the circumstances of men like Napoleon and Wellington however, much of their ability to inspire confidence rested upon physical displays of their bravery and fortitude and an ability to keep a cool head in the heat of battle. ...read more.

Just as Grant often berated his Wellington had to cope with officers who although brave and loyal were ultimately fairly incompetent. Wellington's relationship with his men is widely discussed because he famously referred to his soldiers as the "scum of the earth", but although this does not seem a likely way to endear yourself, it was representative of his position firmly established above the men and the aura he had while also treating his men with genuine care and sympathy. The changes to Generalship across this period have been an inevitable response to dramatic shift in the way war is conducted more generally and how it is perceived in society. The retreat of the Chateau Generals was an entirely logical move made to ensure their health at a time when stability was such an essential element. The vast scale of 20th century conflict placed an unprecedented burden of responsibility in the hands of the Generals and in this task it is understandable that 'Old Heads' were favored over younger alternatives. But in my assessment of the nature of leadership across the period I would address the more significant and fundamental continuities. Principles of leadership are much debated because the individuals who perform so brilliantly possess qualities that most people cannot fully understand and as such find difficult to pin down. The element of charisma and personality of the leader is one element which transcends any factor such as age, and has been the vital element in success throughout history. Practical considerations and tactical flexibility of course are crucial, but, particularly in an age of such mass participation, surely the factor of individual and collective motivation obtains even greater significance as the margins in other areas are reduced. Napoleon and other such innovators in the tactical dimension will always be caught up eventually, but the qualities of a good leader remain unshakeable and can be adapted to fit the very changeable processes of war. ...read more.