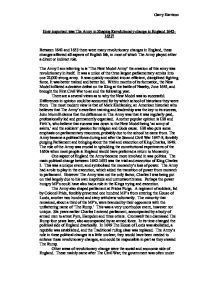 How important was The Army in Shaping Revolutionary change in England 1642-1653?

How important was The Army in Shaping Revolutionary change in England 1642-1653? Between 1642 and 1653 there were many revolutionary changes in England, these changes affected all aspects of English life, in most of which The Army played either a direct or indirect role. The Army I am referring to is 'The New Model Army' the creation of this army was revolutionary in itself. It was a union of the three largest parliamentary armies into one 22,000 strong army. It was quickly moulded into an efficient, disciplined fighting force. It was better trained and better led. Within months of its formation, the New Model inflicted a decisive defeat on the King at the battle of Naseby, June 1645, and brought the First Civil War to an end the following year. There are a several views as to why the New Model was so successful. Differences in opinion could be accounted for by which school of historians they were from. The most modern view is that of Mark Kishlansky, an American historian who believes that The Army's excellent training and leadership was the key to its success, John Mornill claims that the difference in The Army was that it was regularly paid, professionally led and permanently organised. ...read more.

The debates spoke largely about The Army's influence on England socially, however not all of The Army shared the same views. The spokesman for the Army Council was Henry Ireton, he represented the gentry officers of The Army, Ireton argued that these proposals would cause problems if the lower classes were to be involved in government business. Rainsborough, who represented the ordinary rank and file, replied that everyone should have a say in politics not just the rich. Rainsborough said, "Every man that is to live under a government ought to first by his own consent to put himself under that government." There were lots of other social and also economic changes during this time, for example taxation rose, this was mainly to fund the civil wars, the Commonwealth (Rump) also imposed many acts, for example, on the 20th of September censorship was imposed on all printed material, this was a way for The Rump to try and control public opinion. The death penalty was introduced for adultery, this appears somewhat firm, The Rump may have been so strict to retain social order, however these legislation so seem to be authoritarian. Like The Army the Rump had a massive impact on the shaping of revolutionary change, however the Commonwealth depended on The New Model Army to remain in power. ...read more.

is difficult to answer. On a scale from one to ten I would say that The Army's responsibility would be seven, indicating that The Army was more than averagely important. Indirectly, The Army's influenced a significant number of decisions and changes in this time, they were needed to enforce any new legislations or decree's put forward by the government, the execution of King Charles I being a good example. The soldier's views would have been listened to more readily, giving The Army more of a say in politics, which is illustrated by the Putney debates, and if The Army didn't agree with the political situation, it would flex its military muscle, as we saw at Prides Purge. This shows how the direct involvement of The Army, indirectly impacts the revolutionary changes that followed. When referring to The Army we must also bear in mind who we are referring to, is it The Army by definition, i.e. the soldiers, cavalry etc, or the Leaders like Ireton, Pride and Cromwell, who we have already seen, have their own impact on decisions and change. It is also difficult to determine the Army's importance as there were many other contributing factors. It is clear however that were it not for the revolutionary New Model Army, many revolutionary changes would not have developed in the same way, or even at all in the years 1642 - 1653. ?? ?? ?? ?? Garry Harrison ...read more.