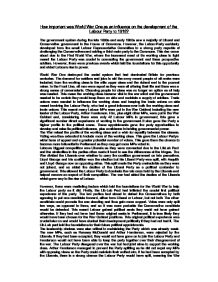 How important was World War One as an influence on the development of the Labour Party to 1918? (redone version)

How important was World War One as an influence on the development of the Labour Party to 1918? The government system during the late 1800s and early 1900s saw a majority of Liberal and Conservative government in the House of Commons. However, the Labour Party suddenly developed from the small Labour Representative Committee to a strong party capable of challenging the Conservatives and adding a third main party to the Commons. This rise came about due to the First World War, where the increased need of the working class to fight meant the Labour Party was crucial in connecting the government and these prospective soldiers. However, there were previous events which laid the foundations for this opportunity and aided Labours rise to power. World War One destroyed the social system that had dominated Britain for previous centuries. The demand for soldiers and jobs to aid the army meant people of all ranks were included, from the working class to the elite upper class and the richest earl to the poorest miner. ...read more.

The War divided the Liberals over whether to carry the coalition government on into peacetime. Lloyd George and his coalition won the election but his Liberal Party was split, with Asquith and Lloyd George now on opposing sides. This split made the Party unelectable as they were not joined, and so aided the decline of the Liberal Party as a political contender to government. This allowed the Labour Party to dominate the role once held by the Liberals and helped remove an aspect of their competition. The war had aided the decline of the Liberals which gave way to the rise of Labour. However, there were mediating factors which laid the foundations for the World War to help the Labour party as it did. Firstly, the Lib-Lab Pact had initiated the crucial first political experience of the party. The two parties had aimed to defeat the Conservatives by both agreeing to put one candidate forward, either from Liberal or Labour, but not both. The other candidate could promote the one standing and thus gain more support. ...read more.

The First World War would thus have had little effect as the Party would have had no MPs in Parliament. Funding was essential for developing the Party and gaining it any political influence at all. In conclusion, the First World War did have a significant influence on the Labour Party. It destroyed class barriers and gave the working class a new importance. Trade unions became essential to influence the working class and the Labour Party was needed to help keep both elements of the side of the government. Many MPs were given places in the War Cabinet and the vote was extended to allow more working class voters. The War also severely damaged the Liberal Party and aided its decline, allowing the Labour Party to fill this place. However, the foundations for this were laid before the War. Initial political experience and good leadership choices allowed the Party to remain united and essential funding meant the Party had the ability to become politically experienced. These factors meant benefits of the War were truly felt by the Labour Party and its developing presence could be further expanded to make it a true political force. ...read more.