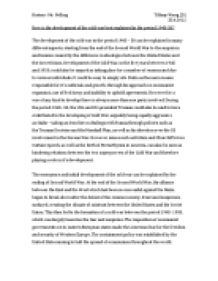 How is the development of the Cold War best explained in the period 1945-50?

﻿History- Mr. Pelling Tiffany Wong (D) 25.4.2012 How is the development of the cold war best explained in the period 1945-50? The development of the cold war in the period 1945 ? 50 can be explained in many different aspects, starting from the end of the Second World War to the suspicion and tension caused by the difference in ideologies between the United States and the Soviet Union. Development of the Cold War, in the five years between 1945 and 1950, could also be argued as taking place for a number of reasons and due to various individuals. It could be easy to simply site Stalin as the main reason responsible for it?s outbreak and growth, through his approach on communist expansion, use of Red Army and inability to uphold agreements. However for a war of any kind to develop there is always more than one party involved. During the period 1945 -50, the USA and it?s president Truman could also be said to have contributed to the developing of Cold War, arguably being equally aggressive as Stalin ? taking an Iron fist on dealings with Russia through policies such as the Truman Doctrine and the Marshall Plan, as well as his direction over the US involvement in the Korean War. However issues such as Britain and Churchill?s Iron Curtain Speech, as well as the birth of McCarthyism in America, can also be seen as hindering relations between the two superpowers of the Cold War and therefore playing a role in it?s development. ...read more.

Stalin?s aims were of an aggressive, dominative nature and to be wary of by the allies. It supports the idea that Stalin was looking to convert Poland to communism, thus explaining his reluctance to uphold free elections as agreed at Potsdam, and suggesting Western powers had a right to be defensive and take harsher action in their dealings with the USSR. Another key example of Stalin?s aggressive foreign policy is his part in the events of the Berlin Blockade. As agreed at Yalta, a post war Germany and Berlin were split into Western and Eastern zones; recognised that this could not be a long term solution, the West wanted to rebuild Germany and create a stable democracy and economy ? Stalin on the other hand was more concerned with making Germany pay to the full extent. Continuing disagreements over the economic future of Germany meant that the West decided to introduce a new currency, the deutsche mark, to help economically prosper their zones, including Berlin, without informing the east. Stalin was extremely angered by this and soon he took action by stopping all road, rail and canal links with West Berlin, as well as shutting down power stations resulting in great suffering amongst the city. Airlifts managed to keep western Berlin from starvation and destruction and Stalin eventually conceded, however the damage was already done. ...read more.

For example the famous ?Iron Curtain? speech, delivered by Churchill in March 1946, in which he harshly called for firmer action by the West against the threat of communism. In his speech, Churchill declared that ?from Stettin in the Baltic to Trieste in the Adriatic an Iron Curtain has descended across the continent?, Churchill had called for an alliance between the two countries, suggesting they meet this expansion with an equal level of aggression and intimidation. This hostile view surrounding the USSR outraged Stalin and the speech created an increase in animosity between the superpowers and without a doubt contributed to the outbreak and development of cold war. In conclusion, the development of the cold war is better explained by the actions and suspicion the two superpowers have for one another. Stalin was responsible for the development of Cold War, due to both his disloyalty to important agreements made between the superpowers at Yalta and Potsdam and his clear and successful attempts at Eastern European expansion, as well as his spiteful actions during the Berlin Blockade. At the same time , Truman was also an aggressive leader who successfully spread ideology through his Marshall Plan and openly promoted the condemnation of Communism across the world. Adding other factors such as Churchill?s speech and opinions on communism as well as the American fears of McCarthyism, into the situation meant that Cold War was unavoidable from any angle and could not have been due to one person or event. ...read more.