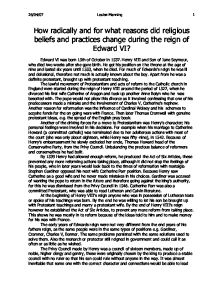 How radically and for what reasons did religious beliefs and practices change during the reign of Edward VI?

How radically and for what reasons did religious beliefs and practices change during the reign of Edward VI? Edward VI was born 15th of October in 1537. Henry VIII and Son of Jane Seymour, who died two weeks after she gave birth. He got his position on the throne at the age of nine and lasted six years until 1553, when he died. For much of Edwards's reign he was ill and delusional, therefore not much is actually known about the boy. Apart from he was a definite protestant, brought up with protestant teaching. The lawful movement of Protestantism and acts of reform to the Catholic church in England were started during the reign of Henry VIII around the period of 1527, when he divorced his first wife Catherine of Aragon and took up another Anne Bolyn who he was besotted with. The pope would not allow this divorce as it involved confessing that one of his predecessors made a mistake and the involvement of Charles V, Catherine's nephew. Another reason for reformation was the influence of Cardinal Wolsey and his schemes to acquire funds for the on going wars with France. Then later Thomas Cromwell with genuine protestant ideas, e.g. ...read more.

Reform was made to please the rich nobles who were needed to fund war. From 1547 - 1551 the profit from coin defacement was �537.000. This however was not a lot more money was raised by the dissolution of the Chantries in December 1947 first thought of by henry. However the military expenditure in Edward VI reign was �1386687. Somerset spent �580393 against Scotland, �351,521 of that was spent on troops, 7434 mercenaries had to be bought because the enrolment system of England was not very good, conditions in the wars were so bad that even some of the mercenaries refused to fight. Somerset carried on the wars to build up England prestige, he could not get out of wars or avoid them with out lowering national pride, meaning he would not be as supported by the nobles. Of the bishops there was a nearly a even distribution of those for and against reformation. Ten led by Gardiner and Edmond Bonner were against, Gardiner was later taken off the council for causing a threat to protestant reform (although this was never said) ...read more.

E.g the changing of the catholic mass went through many changes before it was decided.. Also most changes were made to please certain individuals or communities. The changes in Edward VI reign happened much quicker than in Henry VIII reign. AS Edward was only in power for six years, whereas some times it was six years in Henry VIII before two acts of reform however small e.g. between the royal supremacy and the break with Rome till the dissolution of the monasteries was a long time where everything seemed to run as before. Nearly all the changes in Edward reign could be reversed by the next monarch, especially as all the protestant refugees causing unrest went back to the Holy Roman Empire and other areas. Except the dissolution of the Chantrees and colleges would be hard to undo because lands and funds had been used and redistributed. Also the freedom of ideas did spread a lot so more people knew about it. But after all the protestant centre (London) only of one in five people were protestants at the beginning of Edward reign and more toward the end. SOURSES http://www.britannia.com/history/monarchs/mon42.html http://www.tudorhistory.org/seymour/ Guy - Tudor England Herard - Edward and mary Word count - 2000 ?? ?? ?? ?? 2 1 26/04/07 Louise Manning ...read more.