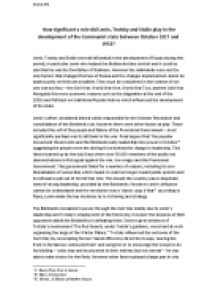 How significant a role did Lenin, Trotsky and Stalin play in the development of the Communist state between October 1917 and 1953?

﻿Jessica Ellis How significant a role did Lenin, Trotsky and Stalin play in the development of the Communist state between October 1917 and 1953? Lenin, Trotsky and Stalin were all influential in the development of Russia during this period; in particular Lenin who helped the Bolsheviks take control and it could be said that he was the forefather of Stalinism. However the individuals were not the only factors that changed the face of Russia and the changes implemented cannot be based purely on their personalities. They must be considered in the context of not one war but four ? the Civil War, World War One, World War Two, and the Cold War. Alongside this were economic reasons such as the stagnation at the end of the 1920s and fall back on traditional Russian history which influenced the development of the state. Lenin is often considered almost solely responsible for the October Revolution and consolidation of the Bolshevik rule, however there were other factors at play. These included the will of the people and failure of the Provisional Government ? most significantly perhaps was its attitude to the war. ...read more.

Another similarity between the regimes is the mass mobilisation of workers to carry out their policies ? Lenin did this throughout the Civil War and Stalin used the workers to carry through rapid industrialisation and collectivisation in the early 1930s. There are some historians, however, who disagree with this argument, pointing out the clear breaks between the two leaders. To begin with, Lenin always saw himself as Marxist ? Stalin developed the cult of Leninism and used it as an ideological orthodoxy to justify his actions. Service said ?he [Lenin] would be appalled at the use made of his doctrines by Stalin?.[5] Another huge difference is their individual employment of purges ? Lenin?s were non-violent whereas Stalin?s included the extermination of leading Bolsheviks, something Lenin had never condoned. Stalin?s use of terror was significantly different to Lenin?s; Stalin set mass terror in motion in the 1930s, just one example of his brutal streak, whereas Lenin used terror as a means to an end ? to achieve his vision of a non-violent utopian state. It could be said that the Russia after the death of Lenin was solely down to Stalin?s personality, which was known to be brutal and paranoid. ...read more.

The purges were one of Stalin?s responses to the threat of war in the 1930s, incentivising people to work even harder to industrialise, but there were other reasons for the purges also. Stalin used the purges to keep control of an unstable society, using insecurity to maintain power, and also to remove any opposition to his policies. They were a way of deflecting the blame for the economic difficulties; they strengthened the NKVD and provided slave labour from the gulags. Although these were partly down to Stalin?s personality and he was very much responsible for the terror, Getty says ?We can now see his [Stalin?s] fingermarks all over the archives [of terror]?[10]; there were other factors which influenced the decision to employ that level of violence. Individuals, especially during the consolidation of Bolshevik power and Stalin?s rule, were obviously very important in changing the face of Russia. Had Lenin not returned to Russia the Bolsheviks may not have attained power at all, and had Stalin not replaced Stalin as leader the USSR may not have become the totalitarian dictatorship it was. There were many factors affecting the decisions made by these individuals which meant but ultimately the power to sculpt Russia fell into their hands. ...read more.