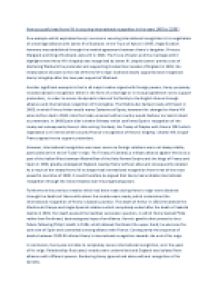 How successful was Henry VII in securing international recognition in the years 1485 to 1509?

﻿How successful was Henry VII in securing international recognition in the years 1485 to 1509? One example which explicates Henry?s success in securing international recognition is his negotiation of a marriage alliance with James IV of Scotland. In the Truce of Ayton in 1497, Anglo-Scottish harmony was established through the marital agreement between Henry?s daughter, Princess Margaret and King of Scotland, James IV in 1501. The Truce of Ayton and the marriage with it highlights how Henry VII?s kingship was recognised by James IV, despite James? previous act of sheltering Warbeck the pretender and supporting his abortive invasion of England in 1496, the treaty lasted 13 years to the end of Henry VII?s reign. Scotland clearly supported and recognised Henry?s kingship after the two year support of Warbeck. ...read more.

Also the treaty ensured neither country would harbour nor assist rebels or pretenders. In 1489 Spain didn?t shelter Brittany which confirmed Spain?s recognition of the treaty and subsequently Henry?s title as king. Similarly, the Treaty of Etaples with France 1942 which negotiated 1 of 3 terms which secured France?s recognition of Henry?s kingship. Charles VIII, king of France agreed not to support pretenders. However, international recognition was never secure as foreign relations were not always stable, particularly at the end of Tudor?s reign. The Treaty of Cambrai; a military alliance against Venice as a part of the Italian Wars between Maximillian of the Holy Roman Empire and the kings of France and Spain in 1508, greatly endangered England, leaving Henry without allies and consequently isolated. ...read more.

The death of Arthur in 1501 threatened the Medina del Campo and Anglo-Spanish relations which completely ended after the death of Isabella Castile in 1504. Her death opened the Castilian succession question, in which Henry backed Philip rather than Ferdinand, destroying any hope of an alliance. Henry?s gamble then proved to be a failure following Philip?s death in 1506, which allowed Ferdinand the upper hand; he was now the sole ruler of Spain and controlled a strong alliance with France. Consequently the sequence of deaths between 1502-06 diluted Henry?s international recognition towards the end of his reign. In conclusion, Henry was not able to completely secure international recognition, as in the years of his reign. Relationships fluctuated, treaties were undermined and England was isolated from alliances with different powers. Rendering Henry ignored and alone without recognition of his dynasty. ...read more.