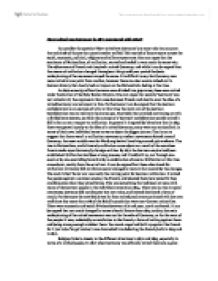 How united was Germany in 1871 compared with 1815? To consider the question 'How united was Germany' one must take into account the multitude of factors that constituted as unified. This myriad of factors spans across the social, economic, political, religious and military spectrums. One can argue that the sentiment of Nationalism, of unification, started and ended in very much the same vein. The abhorrence of French rule inspired a united Germany, and while it can be argued that the means of unification changed throughout this 50 odd year period the basic underpinning of the movement stayed the same. It is difficult to say that Germany was more united at one point than another, however there are clear events staked out in German history that clearly had an impact on the Nationalistic feeling at the time. In 1800 some 23 million Germans were divided into 314 states; these were united under the banner of the Holy Roman Empire. One can argue that socially 'Germany' was not united at all, the arguments that arose between Prussia and Austria over the idea of a united Germany are testament to this. Furthermore it can be argued that the German confederation is an example of unity at this time; the main aim of the German Confederation was to maintain the status quo. Inevitably that entailed continuing on with a divided state system, so while the concept of a 'German' confederation sounds united it did in fact act as a stopper to unification. ...read more.

Religion links in closely to the different situations in 1871 and 1815, especially in terms of a unified people. In 1871 when Germany was officially united there was a great difference in terms of religion. Over 60% of the population were Protestant, but Catholicism was strong in Alsace-Lorraine, in South West Germany, in the Rhineland and among the Poles. Obviously religious unity was not in the forefront of the united factors. In 1815 the liberals wanted reform, they wanted freedom of speech, of the press, of political association and freedom of worship. Ultimately nothing changed from 1815 to 1871 in terms of religious unity. Economic unity was not in the forefront of the minds of the German people in 1815. It was really only until 1830 with the introduction of the Zollverein that an economic unification was considered. Indeed there are many arguments that show that while the economic advantages of the Zollverein and industry were necessary to unite Germany there is no evidence to show it was sufficient enough to unite it by itself and that it was merely a factor that contributed to unification. The eventual shape of the united Germany was the same shape of the Germany bound together by the Zollverein, while many states felt that the zollverein offered great economic stability this was the limit to their attraction to the concept of unification. ...read more.

While it gave hope to the nationalists, for others it was merely an easy form of organising the economies of the individual states. The military was the main way through which Germany was eventually united; indeed Prussia's ability was one of the main factors that drew the other states towards her, and eventually towards unity. In 1815 each individual state had its own army. Occasionally states would come together to fight off an enemy, but in general this was done begrudgingly and they would go back to the status quo after the issue had been dealt with. In 1871 the situation was much the same, however it ended in a very different manner to how it used to end in 1815. The individual German states came together in the Franco-Prussian War and ended up united. Where socially and economically others had failed to unite Germany together; the taste of victory had united them. In conclusion one can argue that Germany was more united in 1871 than in 1815 purely because being 'German' was now something that many of the population aspired to. While in 1815 nationalism had been limited to only individuals in individual states it had now spread to the idea of 'Germany' as a whole. In 1871 the states were united under the banner of Germany and while there were many factors separating them; religion, nationality etc. there is still a lot to be said for the coming together of Germany. ?? ?? ?? ?? ...read more.