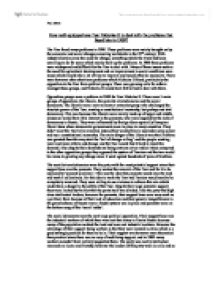 How well equipped was Tsar Nicholas II to deal with the problems that faced him in 1900?

How well equipped was Tsar Nicholas II to deal with the problems that faced him in 1900? The Tsar faced many problems in 1900. These problems were mainly brought on by the economic and social changes occurring worldwide in the 19th century. With industrialisation came the need for change, something which the Tsars had been unwilling to do for years which merely built up the problems. In 1900 these problems were widespread and difficult for the Tsar to deal with. Many of these issues such as the need for agricultural development and an improvement in social conditions were issues which would take a lot of time to improve and would often be expensive. There were however other short term problems which Nicholas II faced, particularly the opposition to the Tsar from political groups. There was growing calls for reform amongst these groups, and Nicholas II would have felt he had to deal with them. Opposition groups were a problem in 1900 for Tsar Nicholas II. There were 3 main groups of opposition; the liberals, the socialist revolutionaries and the social democrats. The liberals were a non-militant or extremist group who challenged the absolute power of the Tsar, wanting a constitutional monarchy, but perhaps not total democracy. ...read more.

Therefore the Tsar was more likely to repress the opposition than concede to them. To repress the opposition he could use a number of well tried and tested techniques which the Tsars had been using for years. He could censor publications and the media to remove negative comments or opinions about him so he did not lose support. He could also sensor opposition publications to prevent them gaining support. The Tsar could also exile the leaders of opposition, which would therefore weaken the party and potentially prevent them from developing. He could also use the Okhrana, the secret police to infiltrate opposition. This would lead to arrests of leaders and also intelligence being built up by the Okhrana so that the party's movements and activities would be known. Nicholas could also use propaganda against opposition groups to lose them support and also gain him support by exaggerating his successes. Finally in extreme cases Nicholas II could use troops against uprisings or large riots to crush any large threats which grew out of hand. The Tsar was also faced by many long term problems. In 1900 Russia's administration was very unorganised and backwards. ...read more.

It would have angered the upper classes and so won him more enemies. Overall Tsar Nicholas II was not well placed to deal with the problems he faced in 1900. There were no immediate solutions to the issues he faced and in the face of growing opposition and discontent this was what he required. Many of the long term problems he faced would need to be brought in over a long period of time and also at great expense which meant he was less able to deal with them since it may take a life time to complete some of them. The short term problems Nicholas II faced were much more easy to manage, either by repression or concession. Therefore since repression was the policy he was most likely to pursue Tsar Nicholas II would have been forced to repress in the short term while bringing in a number of long term reforms, something which he had neither the vision nor the skill to do. In the words of The Miniaturist 'only a genius' could have 'coped with the task of ruling a vast Empire in the grips of a deepening revolutionary crisis... and Nicholas was no genius'. ?? ?? ?? ?? Paul Marie ...read more.