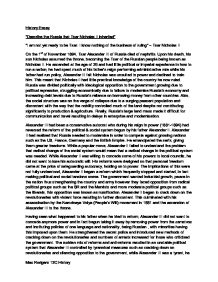 History Essay "Describe the Russia that Tsar Nicholas II inherited" "I am not yet ready to be Tsar. I know nothing of the business of ruling" - Tsar Nicholas II On the 1st of November 1894, Tsar Alexander III of Russia died of nephritis. Upon his death, his son Nicholas assumed the throne, becoming the Tsar of the Russian people being known as Nicholas II. He ascended at the age of 26 and had little political or imperial experience in how to run a nation; he had spent much of his father's reign performing administrative role while his father had run policy, Alexander III felt Nicholas was unsuited to power and declined to train him. This meant that Nicholas II had little practical knowledge of the country he now ruled. Russia was divided politically with ideological opposition to the government growing due to political repression, struggling economically due to failure to modernise Russia's economy and increasing debt levels due to Russia's reliance on borrowing money from other countries. Also, the social structure was on the verge of collapse due to a surging peasant population and discontent with the way that the nobility controlled much of the land despite not contributing significantly to production & agriculture. ...read more.

was a ballooning working class and increases in poverty and hunger in addition to the peasants wanting their own land and becoming politically aware. This coupled with an outdated autocratic system meant that Russia and Nicholas II were ill prepared to deal with the demands of its people meaning that the political system was dangerously on the verge of collapsing due to the changes in the social structure of Russia during the 19th century. The social structure in Russia at the time of Nicholas II's ascension in 1894 had undergone several changes in the past few decades. The nobility who were the ruling class made up just over 1% of the population but owned 25% of the land, creating a massive equality gap and meaning that the key to agricultural and industrial development was in the hands of a small amount of people. Some of the nobility held positions in the government and military but were there because of influence, not merit meaning that many key officials were corrupt or incompetent, resulting in a problem of how to deliver efficient government. Also, an increasing number were moving to cities so communication between them and the peasants on their land was difficult. ...read more.

While perhaps it is no fault of the Tsars that Russia is such a large country, it can be said that their economic policies hampered modernisation of the transport and industrial system. They had no idea about how to control this so in effect, Nicholas II inherited a large country that was struggling to travel across its own land. To conclude, Nicholas II suffered mostly because of the mistakes of the previous Tsars. He ascended as an autocrat, but the autocracy in Russia was becoming outdated and the position was unable to cope with a modernising country, especially with it now being occupied by a weak man. The political system had lost much credibility due to the failure of reforms and the unequal social structure meant that increasing numbers of peasants were disenchanted with the way that they were being treated, leading to social tensions. The economy was restricted and outdated and unable to cope with industrial demand, meaning that it could not effectively modernise. So, Nicholas II inherited an effectively outdated Russia struggling to modernise. "There is a radical difference between Russia and a colony: Russia is an independent and strong power. She has the right and the strength not to want to be the eternal handmaiden of states which are more developed economically." - Sergei Witte ?? ?? ?? ?? Max Rodgers 12C History ...read more.