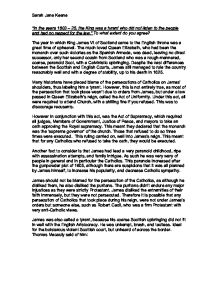 &quot;In the years 1603 - 25, the King was a tyrant who did not listen to the people and had no respect for the law&quot; To what extent do you agree?

"In the years 1603 - 25, the King was a tyrant who did not listen to the people and had no respect for the law." To what extent do you agree? The year in which King James VI of Scotland came to the English throne was a great time of upheaval. The much loved Queen Elizabeth, who had been the monarch over such victories as the Spanish Armada, was dead, leaving no direct successor, only her second cousin from Scotland who was a rough-mannered, coarse, paranoid Scot, with a Calvinistic upbringing. Despite the vast differences between the Scottish and English Courts, James still managed to rule the country reasonably well and with a degree of stability, up to his death in 1625. Many historians have placed blame of the persecutions of Catholics on James' shoulders, thus labeling him a tyrant. However, this is not entirely true, as most of the persecution that took place wasn't due to orders from James, but under a law passed in Queen Elizabeth's reign, called the Act of Uniformity. Under this act, all were required to attend Church, with a shilling fine if you refused. This was to discourage recusants. However in conjunction with this act, was the Act of Supremacy, which required all judges, Members of Government, Justice of Peace, and mayors to take an oath approving the Royal supremacy. ...read more.

Most of the descriptions of James come from Sir Anthony Weldon, who was a civil servant of the time. He disliked some of James's views on the Catholic 'situation', and so effectively badmouthed him in his writings 'The Court and Character of King James.' This is one of the few texts that remain from that era, so is a frequently used source about James by historians studying that period. However it is not very pleasant, and offers an anti-James view, leaving us with no other source of contradiction. It is true that, under James's reign, the poor remained as hungry and insignificant as they had ever been. James has been accused of not listening to the people, and while this is true of the 95% of the population, he listened to the remaining 5% who were the landed aristocracy. These were the people with power, and therefore the ones worth listening to. And while sessions of parliament were irregular and often only for one purpose such as approval of money, James instead used the opportunities of the Royal court to stay in touch with the differing political opinions of the time. This meant that those in court could not speak freely of their opinions of James himself, to the same extent that they could in parliament, because they didn't have the luxury of certain rights (freedom of speech, freedom from arrest etc.) ...read more.

This displays that even before he was James I of England, as James VI of Scotland he respected the laws that he set himself. He also wrote extensively about how a king should act in his book Basilcon Doron, setting guidelines down for his son. Another argument against James is that on his journey down from Scotland to be crowned in London, he stopped in the town of Newark. He was witness to a pickpocket being caught and ordered that the punishment be hanging. The obedient councilors did as James said, and after the deed had been done told him that in England the king did not have the power to put someone to death without a trial. This is not a case of James having no respect for the law, simply a case of not knowing the differences between the English and Scottish systems. In conclusion, James was an adequate and fairly successful king. He was not the tyrant sometimes described, and listened to the people that mattered at the time, the landed aristocracy. Although he did not charm them the way the former queen did, he managed to keep them satisfied by gifts and rewards for loyalty at the expense of his own pocket. And he respected the law as much as was possible to, by following the guidelines he set himself. Sarah Jane Keene ...read more.