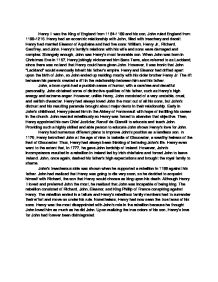 Henry II was the King of England from 1154-1189 and his son, John ruled England from 1199-1216. Henry had an eccentric relationship with John, filled with treachery and deceit. Henry had married Eleanor of Aquitaine and had five sons: William, Henry Jr., Richard, Geoffrey, and John. Henry's family's relations with his wife and sons were damaged and complex. Strangely enough, John was Henry's most favorable son. When John was born in Christmas Eve in 1167, Henry jokingly nicknamed him Sans Terre, also referred to as Lackland, since there was no land that Henry could have given John. However, it was ironic that John "Lackland" would eventually inherit his father's empire. ...read more.

Henry had always loved John the most out of all his sons, but John's distrust and his resulting paranoia brought about major dents in their relationship. Early in John's childhood, Henry placed him in the Abbey of Fontevrault with hope of instilling his career in the church. John reacted rebelliously so Henry was forced to abandon that objective. Then, Henry appointed his own Chief Justiciar, Ranulf de Glanvill to educate and teach John. Providing such a highly skilled and able person to educate John shows Henry's love for John. Henry had numerous different plans to improve John's position as a landless son. In 1176, Henry betrothed John at the age of nine to Isabella of Gloucester, a wealthy heiress of the Earl of Gloucester. ...read more.

John had realized that Henry was going to die very soon, so he decided to acquaint himself with Richard, the son that Henry would choose as king upon his death. Although Henry II loved and preferred John the most, he realized that John was incapable of being king. The rebellion consisted of Richard, John, Eleanor, and King Phillip of France conspiring against Henry. The rebellion ended in a failure and Henry's rebellious family members had to surrender their effort and move on under his rule. Nonetheless, Henry had now seen the true faces of his sons. Henry was the most disappointed with John's role in the rebellion because he thought John loved him as much as he did John. Upon realizing the true colors of his son, Henry's love for John had forever been disintegrated. ...read more.