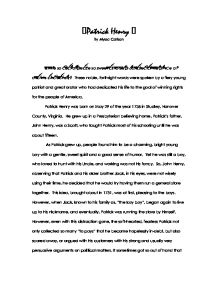 Patrick Henry was born on May 29 of the year 1736 in Studley, Hanover County, Virginia. He grew up in a Presbyterian believing home, Patrick's father, John Henry, was a Scott, who taught Patrick most of his schooling until he was about fifteen.

?Patrick Henry ? By Alyssa Carlson Is life so dear or peace so sweet as to be purchased at the price of chains and slavery? These noble, forthright words were spoken by a fiery young patriot and great orator who had dedicated his life to the goal of winning rights for the people of America. Patrick Henry was born on May 29 of the year 1736 in Studley, Hanover County, Virginia. He grew up in a Presbyterian believing home, Patrick's father, John Henry, was a Scott, who taught Patrick most of his schooling until he was about fifteen. As Patrick grew up, people found him to be a charming, bright young boy with a gentle, sweet spirit and a good sense of humor. Yet he was still a boy, who loved to hunt with his Uncle, and working was not his fancy. So, John Henry, observing that Patrick and his older brother Jack, in his eyes, were not wisely using their time, he decided that he would try having them run a general store together. This idea, brought about in 1751, was at first, pleasing to the boys. ...read more.

Do they manifest their zeal in the cause of religion and humanity by practicing mild and benevolent precepts of the Gospel of Jesus? Do they feed the hungry and clothe the naked? Oh, no, gentlemen! Instead of feeding the hungry and clothing the naked these rapacious harpies would, were their powers equal to their will, snatch from the heart of their honest parishioner his last hoe-cake, from the widow and her orphan children their last milk-cow! The last bed, nay, the last blanket from the lying-in woman!"(Poole, 3) Yes, although fined one-cent, Patrick Henry had really won. Respect and loyalty came from the townspeople, and also another 150 some customers. This case' importance not only won him these things, but also a seat in the Virginia House of Burgesses. He had struck his first heavy blow against King George the III. Patrick Henry became a noble, dedicated and respected lawyer to the people of the United States. His boldness to say what needed to be said to the King and his sympathizers caused him to have many enemies, yet his followers loved him with all their hearts. ...read more.

Henry gave his last public orientation on March 4 of that year which was," an inspirational, non-partisan, patriotic appeal for unity to preserve the nation"(Skach, 2). Before Henry could take the honored seat for state legislator, he died from cancer on June 6 and was buried at the Red Hill plantation. Yet, this bold, courageous man will never die in the eyes of the American people. ".... Three millions of people, armed in the holy cause of liberty, and in sick a country as that which we possess, are invincible by any force which our enemy can send against us. ...... It is in vain, sir, to extenuate the matter. Gentlemen may cry, Peace, Peace- but there is no peace. The war has actually begun! The next gale that sweeps from the north will bring to our ears the clash of resounding arms! Our brethren are already in the field! Why stand we here idle? What is it that gentlemen wish? What would they have? Is life so dear or peace so sweet as to be purchased at the price of chains and slavery? Forbid it, Almighty God! I know not what course others may take, but as for me, GIVE ME LIBERTY OR GIVE ME DEATH!"(World Book, 1). ...read more.