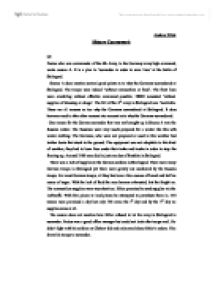 Paulus who was commander of the 6th Army, to the Germany army high command, wrote source A - It is a plea to 'surrender in order to save lives' at the battle of Stalingrad.

Andrew Wilds History Coursework Q1 Paulus who was commander of the 6th Army, to the Germany army high command, wrote source A. It is a plea to 'surrender in order to save lives' at the battle of Stalingrad. Source A does mention several good points as to why the Germans surrendered at Stalingrad. The troops were indeed 'without ammunition or food'. The front lines were crumbling without effective command possible. 18000 wounded 'without supplies of dressing or drugs'. The fall of the 6th army in Stalingrad was 'inevitable. These are all reasons as too why the Germans surrendered at Stalingrad. It does however need to take other reasons into account as to why the Germans surrendered. One reason for the German surrender that was not brought up in Source A was the Russian winter. The Russians were very much prepared for a winter like this with winter clothing. The Germans, who were not prepared or used to this weather had leather boots that stuck to the ground. The equipment was not adaptable to this kind of weather; they had to burn fires under their tanks and trucks in order to stop the freezing up. ...read more.

Source E is German propaganda. It was said in a way to keep the peoples faith in Hitler strong after the defeat in Stalingrad. It does not mention any points of the battle such as frostbite, starvation and lack of supplies. It misses out all of these details as the people would react badly to this and could lose their faith in Hitler. They say that the defeat has only made them stronger, and that the many thousands of people killed was not 'in vain'. It mentions that 'they died that Germany might live', when in actual fat, from looking at source C many of the soldiers had lost their faith in Germany. They could not mention this though. Germany had to keep the soldiers in good morale and to do this they had to be discreet about what really happened in Stalingrad. The source mentions that the battle of Stalingrad gave time to set up defences that decided 'the fate of the whole eastern front'. By mentioning this they were trying to make the people believe that the battle was not at a loss. ...read more.

He had given them all they had asked for and all he had promised to them. They realised though that he had only been taking lucky risks and that his luck had stopped at Stalingrad. " To many he was revealed not as a brilliant military strategist but as a mad corporal". They realised that many Germans lives could have been saved if Hitler had just given in. " If what was promised is not true then Germany will be lost". The defeat at Stalingrad helped the German people to realise this. The Germans victory of World War 2 was becoming less likely. Some say that the defeat was a positive advantage for the Germans as it helped them "fall back and regroup the strike back". It was the Germans 'who took the offensive when fighting season of 1943 opened'. Stalingrad had not been the loss to Germany as many thought it had been, the Germans had 'recovered their fighting spirit' and were very much still 'masters of the field'. The Russians were very grateful for the victory at Stalingrad. It helped the Germans see Hitler in a different light. For these reasons the German defeat at Stalingrad was equally important for both the Russians and the Germans. ...read more.