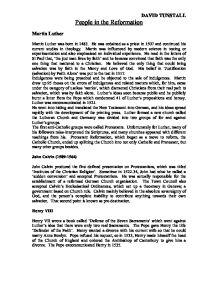 People in the Reformation

DAVID TUNSTALL People in the Reformation Martin Luther Martin Luther was born in 1483. He was ordained as a priest in 1507 and continued his current studies in theology. Martin was influenced by modern science in testing or experimentation and also emphasised on individual experience. He read in the letters of St Paul that, 'the just man lives by faith' and he became convinced that faith was the only one thing that mattered to a Christian. He believed the only thing that could bring salvation was by faith in the Mercy and Love of God. His belief in 'Justification (salvation) by Faith Alone' was put to the test in 1517. Indulgences were being preached and he objected to the sale of indulgences. Martin drew up 95 theses on the errors of indulgences and related matters which, for him, came under the category of useless 'works', which distracted Christians from their real path to salvation, which was by faith alone. ...read more.

He was actually responsible for the establishment of a reformed German Church organisation. The Town Council also accepted Calvin's Ecclesiastical Ordinances, which set up a theocracy in Geneva; a government based on Church rule. Calvin mainly believed in the absolute sovereignty of God, and the person's complete inability to contribute anything towards their own salvation. That second point is known as pre-destination. Henry VIII Henry VII wrote a book called 'Defense of the Seven Sacraments' which went against Luther's idea that there were only two real Sacraments. The Pope gave Henry the title 'Defender of the Faith'. Henry wanted a divorce with his current wife so that he could marry Anne Boelyn. Pope refused his request, so in 1533, Henry made himself the head of the Church of England and ordered the Archbishop of Canterbury to give him a divorce. The Pope excommunicated Henry in 1535. ...read more.

Any people who helped priests were also included in this Act. Over 300 people, 123 of whom were priests, were executed during Queen Elizabeth's reign. Huldrych Zwingli (1484-1531) Zwingli was ordained as a Catholic Priest in 1506, and in 1522-23, he attempted to reform the Church in Switzerland. As a result, all statues, organs and images were taken away from the churches and Mass was banned in 1522. Zwingli taught that the Scriptures were the only authority in matters of faith, and he accepted only two Sacraments, Baptism and the Eucharist. These, he only regarded as symbols, and didn't believe that they carried any grace as the Catholic Church taught. He believed the Eucharist was just a simple meal to help Christians remember Jesus' saving work. He also taught pre-destination, that people's fates were fixed and there was nothing they could do about it. Zwingli was killed in battle against the Swiss Catholic Cantons. By David Tunstall ...read more.