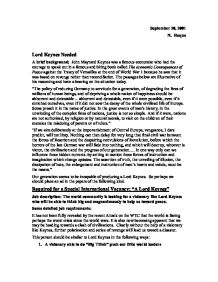 September 20, 2001 N. Haque Lord Keynes Needed A brief background: John Maynard Keynes was a famous economist who had the courage to speak out in a famous and biting book called The economic Consequences of Peace against the Treaty of Versailles at the end of World War 1 because he saw that it was based on revenge rather than reconciliation. The passages below are illustrative of his reasoning and have a bearing on the situation today. "The policy of reducing Germany to servitude for a generation, of degrading the lives of millions of human beings, and of depriving a whole nation of happiness should be abhorrent and detestable -- abhorrent and detestable, even if it were possible, even if it enriched ourselves, even if it did not sow the decay of the whole civilized life of Europe. Some preach it in the name of justice. In the great events of man's history, in the unwinding of the complex fates of nations, justice is not so simple. ...read more.

This person should be similar to Lord Keynes in the following ways: 1. A visionary able to do "Big Think" push our little world leaders o Like Lord Keynes, this visionary will need to be an elder statesman and command the respect of world leaders so that he or she can be heard. o Like Keynes, this visionary should be able to publicly state the truth and not be considered a crank. 2. Move us away from vengeance as the only tool of international policy o (S)he should be able to draw a parallel between the reparations on Germany and the sanctions on the some Muslim countries to punish populations for the sins of the few. o (S)he should be able to think about problems from a global perspective and seek to achieve peace and economic development. For this, she should be able sensitive to the suffering of generations of Palestinians Afghans as well as other poor people who because of European solutions have faced decades of refuge camps, homelessness, poverty and many other hardships. ...read more.

Denying them this right of exit will force them to bigger and bolder acts of terrorism. 4. Help us avoid a clash of civilizations! Following the allies approach to dealing with Germany and Japan after the war, perhaps the visionary can convince NATO that a Pax Islamica is needed to avoid a clash rather than have one after it. Perhaps it is time to review the existing framework for helping poor countries and our modern-day Keynes will help us do that. Perhaps a Marshall plan type approach or the approach that the US took in Japan is now necessary to help countries like Afghanistan, Iraq and Pakistan. o A fully integrated approach (and not just funding) to modernize these places with modern institutions, which let freedom, ring and empower and enshrine individualism, individual effort and initiative. o This will necessarily mean that our current government focused approach that allows closed autocracies to flourish will have to go. Such a person will be able to help us understand why helping these countries may oftentimes involve not giving governments more money but less. Please apply before it is too late! ...read more.