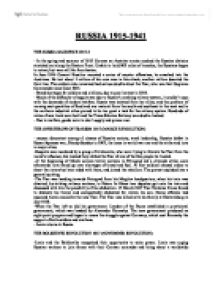 RUSSIA 1915-1941 THE RUSSIA SACRIFICE 1915-6 - In the spring and summer of 1915 German an Austrian armies crushed the Russian division stretched out along the Eastern Front. Unable to hold 800 miles of trenches, the Russians began to retreat, but were still far from beaten. In June 1916 General Brusilov mounted a series of counter offensives, he smashed into the Austrians. He lost about 1 million of his own men in this attack; another million deserted the front line. The soldiers who remained had serious doubts about the Tsar, who was their Supreme Commander since June 1915. - Bread shortages for soldiers and civilians, due to poor harvest in 1916. - Much of the difficulty of supply was due to Russia's creaking railway system, it couldn't cope with the demands of modern warfare. Russia was isolated from her allies, and the problem of moving vast quantities of food and raw material from the south and southeast to the west and to the northern industrial cities proved to be too great a task for the railway system. Hundreds of miles of new track were built and the Trans-Siberian Railway was double-tracked. - Due to warfare, goods were in short supply and prices rose. THE OVERTHROW OF TSARISM 1917 (MARCH REVOLUTION) - causes: discontent among all classes of Russian society, weak leadership, Russian defeat in Russo-Japanese war, Bloody Sunday in 1905, the loses in world war one and the strike and riots in major cities. -Rasputin was murdered by a group of Aristocrats, who were trying to liberate the Tsar from the monk's influence, but instead they robbed the Tsar of one of the few people he trusted. -At the beginning of March women textile workers in Petrograd led a citywide strike; soon afterwards riots flared up over shortages of bread and fuel. At first soldiers obeyed orders to shoot the rioters but later sided with them, and joined the rebellion. ...read more.

Instead, he resorted to a small-scale version of capitalism. The new policies were: that farmers had to contribute 10% of their production to the state but could sell any surplus on the open market; small private businesses were allowed to operate; State controlled industry operated under capitalist notions such as the profit motive, the right to dismiss worker, the right to reduce wages; Trade passed into private hands; Currency reform with the reintroduction of gold backing and balanced budgets; Confiscated property returned and loans made available to those willing to develop timber, oil and other resources. The NEP was the opposite to the goals of the communists but was necessary to avoid continuation of chaos and the possibility of a counter-revolution. Lenin quenched the disagreement within the party, but it was to reappear after his death. The return of capitalist manager was criticised but Lenin realised they were the only ones with the necessary expertise. Lenin retained control of the 'commanding heights' of the economy, although many enterprises went back into private hands. Lenin grouped state-controlled industries together assuming it would be easier to move from this to socialism. Food and industrial production increased, and a massive electricity program was started. - The Great Famine- Lenin was unable to stop the spread of famine and sickness across most of Russia. Lenin was powerless to handle the crisis, but he did get some assistance for Hoover's American Relief administration which brought in grain to feed the railway workers so they could have the strength to build a railway to ship foodstuffs across the country. - Because of the war with Poland, Lenin had no chose but to abandon war communism and the idea of an international revolution. In May 1922 Lenin suffered a stroke which left him partially paralysed. But he still managed to write a testament, because he feared party division after his death. ...read more.

In 1923 the OGPU split away for the NKVD, but merged back in 1934, to act as Stalin's instrument of terror. -1 December 1934 a young communist murdered Sergei Kirov, a member of the Politburo. From 1934-8 Millions died and millions suffered imprisonment because they were suspected of being involved in a conspiracy to overthrow the leadership, Stalin used this excuse for purging soviet society. - Stalin eliminated every possible rival inside the Communist Party, in industry, in the universities and in the armed services. - Stalin, Bukharin and Radek were busy creating a constitution for soviet people, which was presented in December 1936. Twin principles of collective agriculture and state controlled industry, and it guaranteed full democratic rights to all soviet citizens. - Yet thousands of Soviet citizens had already lost all of their democratic rights. The NKVD was arresting highest and lowest in the land. They paraded the most prominent communist before the public, in show trials where the accused made confessions of guilt that astonished the rest of the world. - One million people out of the eight and a half million arrested were shot. By 1939 about 7 million people were held in Soviet prison camps. - Because the Great Purge swallowed up so many leading engineers and technologist, industrial production slowed down in 1938. -The Soviet armed forces suffered immense losses. This was because many senior officers were killed during the Great Purge. THE FOREIGN POLICY OF THE USSR -The foreign policies were dominated by two features: hostility towards the capitalist world, because of Marxist ideology and foreign intervention on the side of the whites during the Civil War and secondly Expansionist nationalism. The Bolsheviks revised their foreign policy when it came clear that the rest of the capitalist world would not undergo revolution. The revised policy was the belief that in the long run world revolution was inevitable, help to those struggling against western imperialism, exploiting the rivalries between the capitalist states and the use of the Comintern to encourage labour unrest. ...read more.