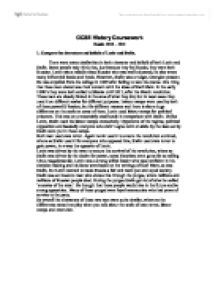 GCSE History Coursework Russia 1905 - 1941 1. Compare the characters and beliefs of Lenin and Stalin. There were many similarities in both character and beliefs of both Lenin and Stalin. Some people may think that, just because they led Russia, they were both Russian. Lenin was a middle-class Russian who was well educated; he also wrote many influential books and thesis. However, Stalin was a vulgar, Georgian peasant. He was expelled from his college in 1899 after failing to take his exams. One thing that these men shared was their concern with the ideas of Karl Marx. In the early 1900's they were both exiled to Siberia until 1917, after the March revolution. These men are closely linked in the area of what they did, but in most cases they used it on different scales for different purposes. Labour camps were used by both of these powerful leaders, but for different reasons and there is also a huge difference on the scale on some of them. Lenin used labour camps for political prisoners. This was on a reasonably small scale in comparison with Stalin. Unlike Lenin, Stalin used his labour camps excessively. Opponents of the regime, political opposition and basically everyone who didn't agree with or abide by the laws set by Stalin were put in these camps. ...read more.

Stalin had a massive impact on Russia and the Russian people. Stalin made Russia into an industrial superpower in less than 30 years, a process that took nearly 100 years for other countries. Stalin got rid of the N.E.P as it wasn't producing enough. So why did Stalin collectivise Russia? There were 6 main reasons. The first reason was because soviet agriculture was seen to be 'backwards.' The second reason was the need for the peasants needing to move to the towns so they could all work together. The third reason was because the NEP was failing the Russian people, and so Stalin needed to improve crop outcome in order to gain the respect of the peasants and the workers. Fourth was the food needed for the 5 year plans and the town workers who were to modernise the soviet agriculture. Fifth, was exporting crops so they could buy bigger machines to help them with their work. This then generated a lot of profit, and the Kulaks were wiped out as nearly all of the peasants were getting richer. Finally the sixth reason was to get rid of the kulaks. The Kulaks opposed communism as they were making their own profit and didn't want to share it with other people who were not doing anything to deserve their money. ...read more.

Under the rule of Stalin, Russia became an international superpower. The rapid industrialisation of Russia meant that Stalin could hold the Germans on the eastern front. Stalin could be compared to Hitler as both of these men killed people who got in their way and those who opposed them just because they could. Even though Lenin was the more, intellectual one of the two, Stalin used his authority to get his own way. An example of this is the purges. This was where Stalin became concerned that people were plotting against him. The great show trials of 1936-37 saw many leading communists confessing to crimes that they had never even committed. In the short term, Stalin thought he was ding good when he got rid of the leading communists, a portion of the army and his secret police. He was wrong as in the long term; a few million people lost their lives. So overall Stalin was the more, influential and leading figure of Russia. Even though millions more suffered for the future generations. What Stalin did to Russia was truly remarkable in the time he did it, But the fact of the amount of dead always comes into play when you talk about one of the most influential leaders of the 20th century. ...read more.