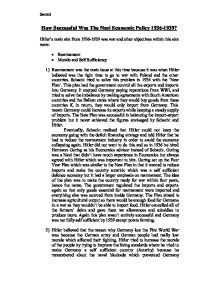 How Successful Was The Nazi Economic Policy 1936-1939? Hitler's main aim from 1936-1939 was war and other objectives within this aim were: * Rearmament * Morale and Self Sufficiency 1) Rearmament was the main issue at this time because it was when Hitler believed was the right time to go to war with Poland and the other countries. Schacht tried to solve this problem in 1934 with the 'New Plan'. This plan had the government control all the exports and imports into Germany. It stopped Germany paying reparations from WWI, and tried to solve the imbalance by making agreements with South American countries and the Balkan states where they would buy goods from these countries if, in return, they would only import from Germany. This meant Germany could increase its exports while keeping a steady supply of imports. The New Plan was successful in balancing the import-export problem but it never achieved the figures envisaged by Schacht and Hitler. Eventually, Schacht realised that Hitler could not keep the economy going with the deficit financing strategy and told Hitler that he had to reduce the rearmament industry in order to avoid the economy collapsing again. ...read more.

2) Hitler believed that the reason why Germany lost the First World War was because the German army and German people had really low morale which affected their fighting. Hitler tried to increase the morale of the people by trying to improve the living standards where he tried to make Germany a self sufficient country (Autarky) because he remembered about the naval blockade which prevented Germany importing any food in and he knew that the allied countries would use the same tactics again to prevent the importing of food. He tried to grow crops such as bananas and other fruits that could only grow in sub tropical countries but these mostly failed and then Hitler gave the expression Jam Later where he meant that if the German people put up with dry bread (rations) then when they won the war and had total world domination they could steal the jam from other countries. He also tried to stockpile metals such as tungsten which would be useful for making army equipment and used to melt steel. ...read more.

Hitler couldn't keep the Guns vs. Butter at constant ratios which also lead to failure. In 1936 Hitler hired Hermann Goring as his Economics advisor instead of Schacht. Goring was a Nazi that didn't have much experience in Economics but always agreed with Hitler which was important to him. Goring set up the Four Year Plan which was similar to the New Plan in that it wanted to reduce imports and make the country autarkic which was a self sufficient defence economy but it had a larger emphasis on rearmament. The idea of the plan was to make the country ready for war within four years, hence the name. The government regulated the imports and exports again so that only goods essential for rearmament were imported and everything else was sourced from inside Germany. The Plan aimed to increase agricultural output so there would be enough food for Germans in a war as they wouldn't be able to import food. Hitler cancelled all of the farmers' debts and gave them tax allowances and subsidies to produce more. Again this plan wasn't entirely successful and Germany was not fully self sufficient by 1939 except potato farming. Samiul ...read more.